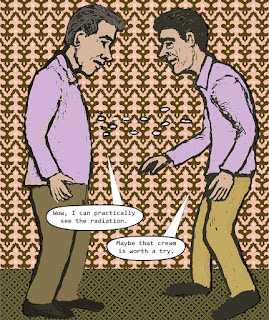 Sheer power of radiation stopped Lohbado in his tracks and caused him to have a look at himself. Lohbado examined Lohbado and concluded radiation cream might be an effective way to rid the body of worms picked up while crossing the Plains. Radiation cream was not an approved substance. Esmerelda made it in a back room of her house where Lohbado stayed for a few days. She offered him a sample.

Esmerelda showed Lohbado to her lab, where it became evident it was worth a try. She applied the cream to his back, chest, legs, arms, neck and face. It immediately provided relief. Heaviness lifted from his chest. He heaved a huge sigh and felt deeply relaxed. He wasn't sure if it was the magic effect of her warm skillful hands or the herbal properties of the cream that released deep waves of healing relaxation from deep within his body.
Posted by Lohbado at 8:05 AM