the mystery of oneself 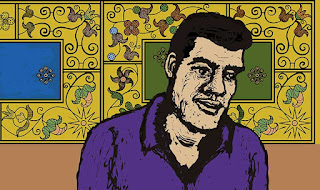 Sometimes Lohbado paused to contemplate himself and his consciousness, the mystery of onseself. From an inner point of view, one feels like a solid person, in control of the situation. From a more panoramic view, one sees nature as filled with infinite forces. One's very existence was the result of desire; a man and woman had sex. Lohbado didn't suddenly decide to exist. He was born. He had no say in the matter. He didn't choose what adults would teach him, until he got older and could select from a menu of courses in university. Even then, he didn't invent what was there.


Inside, he had the feeling of being somebody. Outside, he had identification papers listing height, eye colour, blood type, name, place of birth and so on. He overheard people criticizing him. He got feedback sometimes. In the world, certain things caught his attention. Most things he barely noticed.

He was guided along a certain highway, while being aware of many other roads in other continents. He was encouraged to accept certain beliefs and to learn rules of the game, how to behave in public, how to not get on people's nerves and so on. His consciousness, when he looked, a river of thought appeared. Most thoughts zipped by too fast. He barely skimmed the surface. Certain fantasies and desires took over sometimes. He could be blown about in various directions, like a feather, or could attempt to anchor himself with a routine or discipline.

Lohbado might feel free inside. But his existence was the result of outside forces. His survival depended on an infrastructure of food, water, electricity, internet, hospitals, libraries and so on. Without others, one wouldn't exist or survive. One learns how to fit into society, how to function. It's not something one invents.
Posted by Lohbado at 1:42 PM