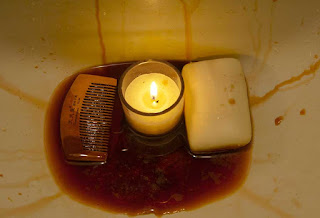 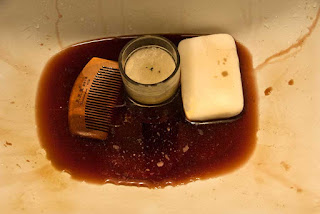 A lit candle, a burned out candle, sour wine, a comb, soap... is this another Moronovian ritual, some sort of excommunication from the mainstream or sorcery to try and sort things out in his mind? Lohbado took these photos about six years ago and found them while searching through his image library for another photo, which he still can't find. Learning to organize images is an ongoing and seemingly hopeless process. Many get lost. Others are found while looking for lost ones.


The candle is an old image of life, most famously prominent in Shakespeare's Macbeth. Macbeth comments: "Out out brief candle..." as his death approaches. One's life might seem like a candle that burns for a while then goes out. One dies and is eventually forgotten. It's like one never even existed. Boo hoo... hoo hoo hee hee cha cha... Ooo is life and cha is what happens. Often Lohbado's life felt like a tale told by an idiot full of sound and fury signifying nothing.

Macbeth's life was nearing an end. The consequence of committing multiple murder caught up with him. Lady Macbeth committed suicide. Soldiers dressed up like trees were coming to get him. At that point he maybe reflected on what he'd done, how he was up to his neck in blood. No wonder he asked himself what it was all about. Why did he do it? In a sense, his behaviour was tragically idiotic... killing a whole bunch of people in order to be king. He succeeded in becoming king... then what? Then he's haunted by the horror of his deeds.
Posted by Lohbado at 6:58 AM