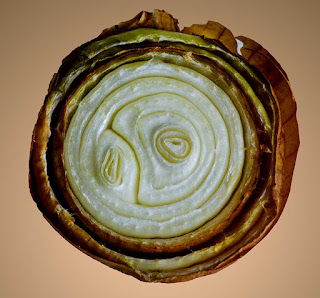 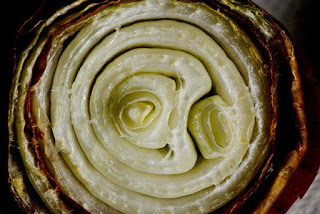 Brain and belly hunger caused Lohbado to continue onion investigations. Today the onion appears as in the above photos, taken about an hour ago, two halves still intact, although in a state of decay. Moisture slowly evaporated from the onion, causing deep wrinkles and shrivelling. Lohbado's brain hungered for greater understanding of the process, while his belly craved blue cheese on rye bread.

Lohbado's eccentric library contained books suited to many occasions. On the occasion of eating blue cheese, Lohbado selected Adorno's Dialectique Négative. The paperback Payot edition even has a blue cover, with the image of an umbrella. Speaking of cause and effect and the whole determinism/free will discussion, whatever you do is a reflection of or related to something going on inside of you1, plus outside influences, conditioning and one's environment. Causality is not something out there in the objects; it's in your mind, an activity of reason. Reason selects and makes links. Lohbado read a section in which Adorno discusses Kant's conception of causality. According to the Kant model of pure reason, the mind is set up with a space/time template which structures reality. One is born into and constrained by space and time.

To be born into a structure and to be constrained suggests one is determined by the nature of pure reason. To be absolutely free would require one to transcend space and time. This is impossible, hence one can never be absolutely free. One is constrained by the set up of one's mind, which is the device enabling one to order or make sense of things.

Free will could occur on a relative level, for example, when one makes a choice or decision, selecting among options. The greater the information and clarity of mind, the greater the scope of one's ability to choose. A person who acts on automatic pilot, stimulus/response, habit or reflex is not exercising much in the way of free will. Is free while spaced out, or when flying into a rage over something which turns out to be a misunderstanding? An example of relative free will in action would be when one decides to buy beer. Some depanneurs in Montreal charge more than others. Lohbado rode around on his bicycle and compared prices and in this way, had greater freedom to choose beer at a lower price.

Free will suggests a self acting without constraint, which is impossible. What exactly is the nature of self? Is self an autonomous entity operating from an omnipotent perspective independently of the world? The fact of being in the world, using a language and acting according to custom means one's behaviour has been moulded or shaped. One did not create oneself or the world. One's self began at birth. As a baby, one goes for the nipple or the bottle and sucks. One's survival is determined by the type of care one receives and as one grows up, by how one interacts with others.

One acts without being aware of all the details or possibilities, since possibilities are endless and details infinite. Plus most of reality is outside the limited sphere of one's perception. One's choice depends on how much one knows or could understand. Not only that, one's very thinking process is a predetermined setup. One thinks in terms of cause and effect. The rational process involves selecting items, making links, joining the dots in attempt to figure out how things work, or in trying to solve a problem. Reason singles out or selects forms from an infinite ground. One's selection fits in with or is mediated by one's desires, hopes and fears. Each selection is a limitation, or a finite situation within the field of infinite possibility. One notices what one likes, avoids what one doesn't like and ignores the rest. Each selection involves that which one did not select. One's choice of coffee occurs in relation to the situation of having been offered tea or water. To choose coffee includes the fact that one did not choose something else. The something else is part of one's decision. One is enmeshed in a world of action and reaction, one thing related to another.

Determinism suggests one acts according to inner necessity, according to causes and conditions or the situation into which one was born. One's thinking is an expression of inner necessity, or the cause/effect mechanism of pure reason. Some might argue that the more one understands cause and effect and inner necessity, the greater the possibility of relative freedom. Within the scope of one's understanding one could make a choice to drive within the speed limit to avoid getting a speeding ticket and to put money in the parking meter.

This discussion occurred as Lohbado ate blue cheese, rye bread, read Adorno and contemplated onion decay. It's useful to understand determinism/freewill, as it could reduce conflict and dispense with the moralistic attitude. If one acts according to causes and conditions, there's no point indulging in name calling or moralistic condemnation. If a person's actions are antisocial or out of order, one could respond in an appropriate manner, without getting high and mighty. If one wishes to help the person, one could begin by examining the causes of the person's behaviour and then set up a rehabilitation program, or if that doesn't work, at least come up with a strategy to ensure the person doesn't pose a danger to self or others.

Being aware of how one is part of a complex world of interdependence could inspire a bit of humility and an open mind. One is not the centre of the universe. One is born into a reality that has existed since beginning-less time and will continue to exist into the infinite future. This could inspire one to adopt an open-minded attitude as opposed to retreating within walls of dogma, or opinion. It involves acknowledging the limitations of one's transparent, emotional, embodied self. Just as the onion gets old and shrivels up, so one's youthful beauty will eventually fade and ripen into old age, sickness and decay. On the bright side, one is free to explore, to be creative, to imagine and to have fun. One could expand one's mental horizon by making an effort to pay attention to details and to continually learn.