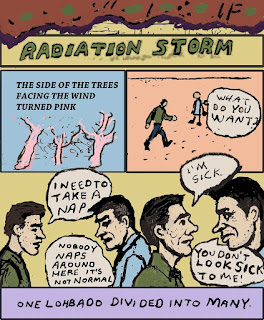 Fallout from the nuclear exchange between Lord Fukelton's Wahula Regiment and General Foakheem's Freedom Fighters spread over the western plains during the Yee Haw Controversy. Lohbado watched as the side of trees facing the wind turned pink. His stomach, throat and eyes burned. Waves of nausea caused him to tremble and see stars.

Lohbado was sick for several months until eventually being forced into early retirement. A week after the nuclear exchange, back in the Dome Community of the Ooo where he worked as a PBE (push button expert) for the DR (department of regulation), in the Cha Region of the Poh Valley, he ran into his supervisor Dick Aston, who wanted to know why Lohbado was wandering the halls at 2 PM. Lohbado said he was looking for a place to take a nap, because he felt sick. Dick Aston told Lohbado he didn't look sick. Dick couldn't feel anything. He thought Lohbado was lying.

All Lohbado wanted to do was lie down. As he listened to Dick's aggressive rhetoric, he began to feel transparent. His body divided into many Lohbadohs. One Lohbado became many. As Dick Ashton puffed himself up and went into a moralistic authoritarian verbal spasm, Lohbado watched a ball of white mucous roll around and form a thread between Dick Aston's upper and lower lips. Lohbado said he would file a grievance if Dick refused to allow Lohbado to lie down. Dick's phone went off in his pocket and saved the day. Dick scurried away. Lohbado had a nap in the staff lounge.