the mark of Cain 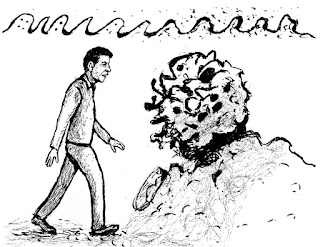 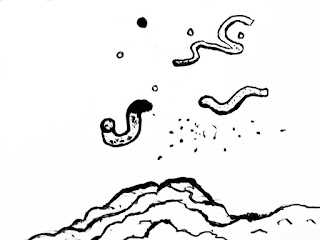 The first day on the Plains of Radiation was the worst. That was about sixty years ago. Eventually Lohbado got used to it. Lohbado thought of the punishment of Cain, condemned to wander the earth and to earn his bread by the sweat of his brow. Cain cried out: “This pain is more than I can bear.”

Cain had anger issues. Maybe he was no fun to be around. The Bible tells stories in a spare, cryptic manner, leaving the reader to read between the lines or to embellish with a little imagination. In a fit of jealous rage, Cain killed Able. He was jealous because God favored Abel. Cain felt spurned. Likely Abel had a more pleasant disposition than Cain. It’s human nature to be attracted to the sunny person rather than to someone who is dark and stormy. So no wonder God favored Abel.

Lohbado was born into a religious household. His birth name was Peter Stumps. His father, the Reverend Stonehenge Stumps was a preacher at the Church of the Living Monument. His father also had a hot temper and often crossed the line and took it upon himself to manifest the wrath of God whenever Peter disobeyed or got on his nerves. While normal youngsters were out socializing and having fun, Peter was imprisoned at home. Since he was not allowed to be normal, he dissociated himself from the world and became immersed in books. The first book he tackled was the Bible. He sympathized with Cain’s sense of rejection, of being the unattractive, non-charming person, the one who doesn’t get chosen. However he wasn’t into jealousy. If God preferred the meat offerings of Abel to the grain offerings of Cain, so be it. As Peter got older and reached puberty, he soon realized the anthropomorphic God was basically useless and irrelevant. He had a psychotic temperament which on more than one occasion caused him to wipe out humanity, even after promising not to.

But the image stayed in his mind, the moment when God cursed Cain... the mark of Cain... The Plains of Radiation... to wander... Peter could feel the sense of desolation and pain Cain must have felt. It was one of the most honest descriptions Peter had ever read about the human condition. The Bible was a very strange and often awe-inspiring book. Too bad some people felt compelled to take it literally.
Posted by Lohbado at 10:38 AM