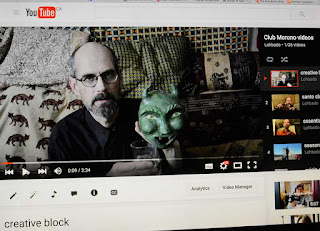 Creative block is when one sets up for a creative session and feels frozen, or unable to proceed. One doesn’t know what to do. One’s ideas seem dull, predictable. One is afraid of making a fool of oneself, or one simply becomes tired, restless and frustrated.

The Club Morono approach to creative block is to just do whatever one sets out to do. If you are a writer. Pick up then pen and write. If you don’t know what to write, begin with a few exercises. Start by carefully writing the alphabet. Then fill a page or two with a list of words, whatever word comes to mind. Don’t think too much. Then make sentences, anything. In this way, one exercises the ability to translate thought into written word.

One could use the creative session to exercise. Just as an athlete follows an exercise discipline, the writer, photographer, dancer, painter, singer... any intensive activity requires exercise. The writer exercises the part of the mind that translates the invisible world of thought into a physical world of symbols which represent the concepts or scenarios the writer brought into focus. A regular discipline of channelling mental events into some sort of material or physical structure could become second nature, after much exercise, discipline and exertion. When the block happens, immediate action works.

If you’re a photographer and don’t know what pictures to take, point the camera at whatever is in front of the eye and begin. Take a hundred pictures. Through regular practice,  the mind strengthens its ability focus on the activity. The mind loosens up and begins to play. Imagination roams about. Memories and mental associations provide fertile material. One makes connections, synthesizing various perceptions and ideas into an aesthetic structure such as a text, image, dance, musical composition...

Not knowing what to do is one aspect of creative block, which could be overcome by simply plunging right in and doing whatever one chose to do. Another factor in creative block is being too judgemental or authoritarian towards oneself. One sometimes is blocked with preconceived notions about how things should be. The creative spirit by nature seeks to go into new worlds, or imaginary and aesthetic situations. Even to repeat a motion over and over again is to do something new, in the sense that each gesture is a gesture that is happening for the first time, just as each new tick of the clock is a new second. Don’t be afraid to do something over and over again. Repetition is at the heart of existence. One breathes over and over again. The heart beats from birth to death.

The process becomes blocked when one’s ego sets up limitations, insisting things be a certain way. In order for things to stay the same or to be how one wants, one would have to freeze reality to match one’s fixed idea. No wonder in such a state of mind one can’t create. If you put a fence around your mind and set up a little boss or administrator who says this is what you must do... that would be a challenge. Lohbado learned the best approach is to give yourself permission to have fun. The mind by nature is curious. People yearn to know, to discover. Discovery involves venturing beyond the familiar, trying things out, having a sense of adventure. To do this requires one become educated about the medium. Learn the tradition. Talk to others in the field. Follow a discipline of exercise. One will be surprised at how eventually the creative mind could loosen up and open doors to worlds one’s ego could never have imagined, when it was so rigid, opinionated and insistent.