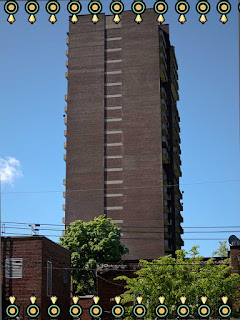 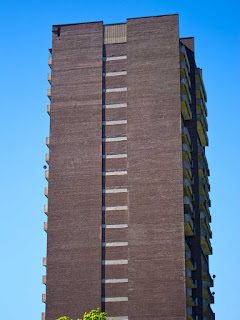 Lohbado turned the corner to take a short cut down a back lane. He rode slowly to avoid broken glass, speed bumps, cracks and pot holes which could knock the air out or puncture a bicycle tire. One also has to be wary of motor vehicles which lunge backwards from parking spots, or delivery vans maneuvering into position at a loading dock. Lohbado looked up and was struck by the solid drab, yet somehow monumental apartment tower on the horizon. The tower drew his mind into the rich blue sky and space. In spite of the speed and noise of a freeway service road, the moment of turning down the lane opened a vast dream-like world, plenty of space for the imagination to have fun. He quickly took three photos then continued on his way. The above scene occurred in May 2013 in Montreal.