fly from the wrath to come 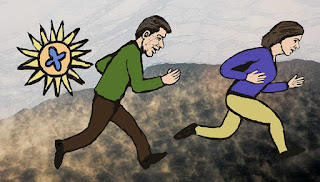 Fear has been a huge part of Lohbado's mind, maybe due to DNA. He must have inherited some sort of rogue gene that made him fear impending doom, or people scheming to get him, to bring about his ruin. This morbid propensity is partly what caused him to undertake a study of religious and philosophical texts.


Much of his inner explorations were in response to outer pressures, such as disturbing world events... famine, economic injustice, climate change, religious fanaticism, increased aggression. Lately the news is enough to really put a person's nerves on edge. It's like history is goes through endless cycles of horror. Hundred years war, thirty years war, two world wars, cold war... it's not likely to ever end. This generates fear of destruction. Plus there's fear of death. The spectre of death lurks in the periphery of one's consciousness. One's body could become a corpse any time. Each individual is vulnerable.

Lohbado explored fear as he lived in solitude, in isolated places, for example, northern Alberta and in the arctic. He was born in a bush town near Sudbury with plenty of time to wander alone in the wilderness and contemplate the nature of existence. Often reality began to fragment. Cracks developed and fear bubbled to the surface.

One gets older, makes mistakes. Sometimes a person reaches the age of 50, goes through divorce, loss of work or some other misfortune. One's life could feel like a shipwreck. Fly from the wrath to come is a line from the 17th century religious classic John Bunyan’s The Pilgrim’s Progress. The narrative opens as a man wandering through the wilderness of this world lies down for a nap and has a visionary dream. He’s handed a document with words on it: “Fly from the wrath to come.” That’s the central tenant of paranoia. Something terrible is going to happen. In a way, John Bunyan's story could be viewed as a person going through midlife crisis instigating serious soul searching. The main character, Christian, deals with embodiments of states of mind. Christian feels a sense of impending doom and destruction, which motivates him to undertake a pilgrimage to a land of salvation.

He leaves his family behind and sets off on a journey leading to the delectable mountains and ultimately paradise. He can no longer inhabit the City of Destruction where he was born. He feels no choice but to set off for the endless Kingdom where one can wear Crowns of glory. His wife, children and neighbours fail to convince him to stay with them in the “City of Destruction.” The hero wants to be with the angels in glory. In heaven, Virgins with golden harps will “dazzle your eyes.” He does not wish to end up in the “place that burns with Fire and Brimstone.” Once he saves his own soul, he will go back and try to save the souls of those he left behind.

The news generates fear. One could get worked up into a hysteria of fear. Something has to be done right away. We’re in a war of good against evil. We’re under threat right now. If we don’t do something, we risk destruction. We're in a vulnerable position. We need to build up our defences.

Of course, who's to say? Maybe we are on the brink of disaster. Maybe world war 3 is about to begin. Maybe island countries and coast line cities will be submerged. Wars will break out over access to water and so on. There are various levels of fear. There's fear in response to disturbing events, fear of death and an overall generalized anxiety.

Daniel Defoe’s Robinson Crusoe first published in 1719 dramatizes the paranoia of a shipwrecked sailor who gathers up the pieces and tries to make a life for himself. He’s the only survivor on a deserted island. The shipwrecked hero manages to salvage material from the wreckage to build himself a shelter. But his mind gets out of control. He's frequently subject to episodes of intense fear. He imagines enemies coming to get him. The enemies will be "cannibal savages."  “In the day great troubles overwhelmed my mind, and in the night I dreamed often of killing the savages...” p. 166. He turns his shelter into a fortified bunker, with a huge arsenal. No matter how many weapons or how strong his bunker, Robison Crusoe never feels safe enough.

Eventually he gets what he almost seems to desire, a chance to test his weaponry. First there’s the episode when he shoots a few people who show up in canoes and obtains Friday, who becomes his devoted servant. The big occasion is when 21 land on the island in canoes. His reaction: “...I was resolved to go down to them, and kill them all...” p 208, which he does. After the carnage, he takes inventory of the situation and notes how each person died “21 in all” p. 213. He and his servant Friday killed them all.

During the massacre, he freed three prisoners. As he reflected on the situation, he felt like a king "... it was a merry reflection... how like a king I looked. First of all, the whole country was my own mere property, so that I had an undoubted right of dominion. Secondly, my people were perfectly subjected. I was absolute lord and lawgiver..." p. 127.

The problem is when one's self -centred urge to survive clouds reason or prevents one from empathizing with others. Instead of seeing all people as human beings, one separates people into friend and foe, for me or against me. A person might resort to violent action instead of mediation. One might shout instead of listening and trying to understand in order to work things out. Maybe at one point, the situation appears impossible. Each side is convinced the other side is wrong. Maybe it is hopeless. Maybe the apocalypse is about to begin. Maybe we should run from the wrath to come. Or maybe there are enough decent people around with patience, intelligence and skill to discuss matters, to work things out in a non-violent manner. I have no idea. Lord have mercy!

page references are to Daniel Defoe, Robinson Crusoe, Bantam Books 1981.
Posted by Lohbado at 9:10 AM