an expression of the infinite 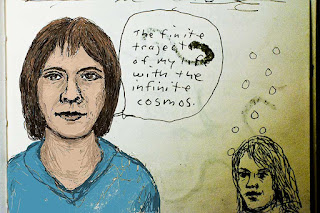 Dr. Jane Wormsly told Lohbado that she identified with infinite nature. Lohbado thought of their last conversation about the importance of having a sense of humour and how painful it is to deal with someone with a big ego. There's nothing worse than an angry person acting on wounded vanity and insisting on revenge. It's so tiresome. It would be so easy to let go, relax, be friendly.


Conflict begets conflict. The desire for revenge is based on a belief in a single fixed entity of self. If one realized the transparent nature of self, there's nothing to defend. This doesn't mean not responding to injustice or not taking appropriate action. It means acting in a rational manner, rather that out of vanity or sense of self. Instead of identifying with self, Dr. Jane Wormly explained suffering could be greatly reduced if Lohbado learned to identify with infinite nature and view his ego as a porous sequence extending from birth to death. Eternal life is right now. Freezing one's ego and trying to preserve it for eternity is not eternal life; it's an eternally dead frozen instant.
Posted by Lohbado at 12:33 PM