Granny in the nursing home 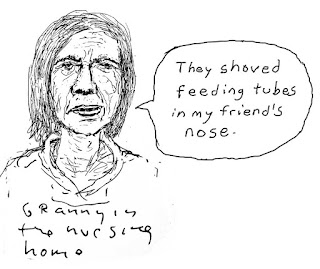 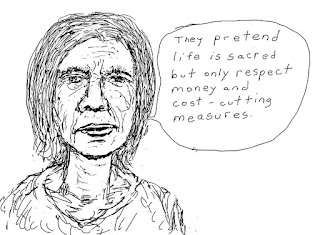 The above cartoon is in response to a recent article in New York Times about force feeding of certain elderly people. Tube feeding is used as a cost cutting measure. It's cheaper than hiring someone to spoon feed the elderly person, like in the old days. Lohbado, as a high school student had a part time job back in the early 1970ies, working at a nursing home as an aide. He used to spoon feed elderly people who had lost the ability to feed themselves. It's hard to believe that tubes are now being shoved up the nose and down the throat, a painful, cruel procedure.
Posted by Lohbado at 9:58 AM