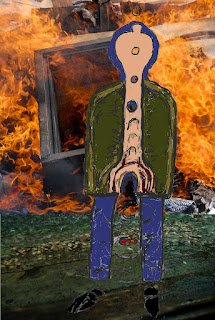 According to instructions from the Chief Nomroh, Lohbado must not be afraid to interact with people in the dreaming universe under the infinite sky. Sometimes it's scary out in the jungle of the world. Lohbado felt torn with physical and psychological hunger, the urge to acquire more, to consume and then the need to void, release, let go and clean up. Sometimes the process could be quite tiresome. Sometimes it makes sense to sit quietly for a while.


Lohbado had another flashback to when he worked as a Push Button Agent for the Department of Regulation. Agents mistrusted one another. They formed alliances to protect themselves. It was a dysfunctional workplace. The only thing that held the group together was fear of destruction, of enemies outside the domed community. Outside the bubble of protection, warrior clans of the Yee and the Haw roamed in the desert dunes. Just as klans fought it out in the desert, agents clawed and picked away at each other inside the bubble.

At first Lohbado was shocked to be forced into early retirement on a very small veteran pension. But then, he was glad to be free from daily turmoil and competitiveness. However, even on his own, he was wary. In Yamaville, people were very concerned about one's social economic status. One's status determined whether or not one got treated with respect. Veterans had low income status and therefore  were usually avoided, not worth talking to. They were viewed as dummies. There's an Aesop's fable: when the lion is down, even the donkey comes by to give it a kick. Lohbado learned to live a quiet life, away from the maddening crowd.
Posted by Lohbado at 8:49 AM