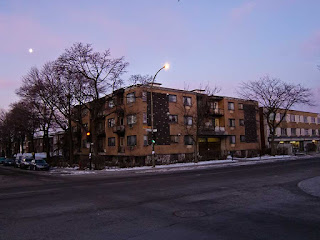 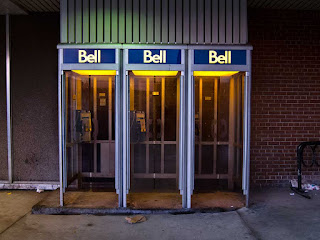 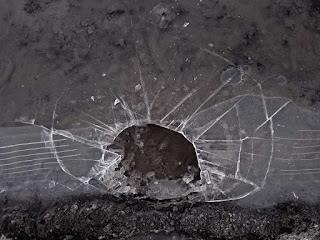 The above three images are Moronovian Easter Eggs, four visual experiences. Lohbado woke at 5 AM in his Cote des Neiges apartment and went for a walk. The beautiful morning twilight made him think of brightly colored easter eggs. Easter, as many have pointed out, is related to the Babylonian goddess Ishtar, a celebration of sexuality and procreation. As a boy, Lohbado, then known as Peter Stumps, went to church every Sunday at The Church of the Living Monument, where his father the Reverend Stonehenge Stumps presided. Easter Sunday was a big deal, the resurrection. After Jesus was crucified and put in a tomb, he rose from the dead.


Lohbado had no idea what it all means. It's part of a story that began when he was born and will end when his body becomes a corpse. Meanwhile, the infinite universe is filled with vivid sights and sounds. The moon at sunrise, a row of phone booths, a thin layer of ice on puddles. Lohbado enjoyed breaking the ice on the surface of puddles. The images also evoked dream-like sensations. In the world of dream, there's no ultimate explanation. Forget about trying to tack on a meaning. Maybe this is what makes them speak so loud. Dream images with their lack of precision often have a powerful effect on the psyche. They could be nothing more than a chaotic flood of random images, or they could be indicators of underlying psychic forces.

Lohbado experienced frequent episodes of malaise and dissociation as he absorbed shock waves from horrific events occurring on planet earth. He hadn't quite mastered the art of ignoring or tuning out unpleasant news. We're all in the same boat. Things get out of control. One feels powerless. One has no choice but to live, to cheer up. Lohbado vowed to do his best to cheer up and to try and tame the aggression and confusion in his mind. Maybe his vow would never amount to more than an aspiration. An aspiration is better than nothing. Instead of shaking his fist at the world, Lohbado would offer flowers. Lohbado defined himself as a man who loved flowers as opposed to somebody who loves guns or hate-filled points of view.

Lohbado rose from the bed on Easter Sunday, went for a walk, then joined friends for a joyful gathering.
Posted by Lohbado at 7:45 AM