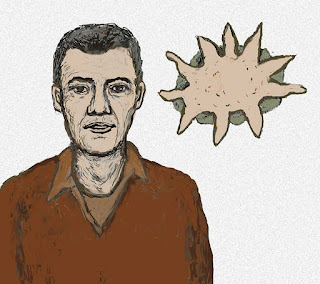 An invisible mental world mirrors and acts as a means to organize one's life in the material world. Thoughts, decisions, any kind of reasoning or logic is invisible and yet has a huge impact on the visible. This is quite obvious. Sometimes one could be hypnotized by the world of the senses into thinking that's all there is. However, without the activity of intellect, humans would be more like animals, acting on instinct or very simple cause and effect reactions.


Mathematics is an obvious example of the intelligible world. Geometric figures and mathematical theorems are abstract. You can't see 1 + 1= 2 in nature, although by examining things, for example, playing with pebbles, one could come up with how to represent the action of taking one stone, putting it next to another stone, so that one has two stones and eventually arrive at the idea of number. Triangular or circular shapes could be found in nature, but the definitions or properties are constructions of intellect. Nature doesn't care about numbers, angles or points. The mind came up with the idea that all points on the circumference of a circle are equidistant from the centre or that the angles of a triangle add up to 180 degrees.


Lohbado mentioned this one day in conversation to someone who believed in appearances. The way things appear is the way they are... this is naive realism. Take a stick. Poke it half way into clear water. The stick will appear bent. If the stick appears bent, does that mean the stick is actually bent? It's an optical illusion. The earth appears flat. By means of mathematics, ancient Greeks were able to calculate the circumference of the earth and that the earth is a sphere which rotates around the sun. The earth might not appear round, but it is round.

Language is another example of how intellect structures reality. Language is a set of abstract symbols representing sounds adding up to names of things and statements about things. The word cat is not a material thing. It's an intellectual or abstract object. One could write the word on a sheet of paper. As written object, one sees three letters: C A T. There's no cat in there. To find the cat, one has to understand language as referring to or representing something. The letters and the sound refer to a furry whiskered animal which says meow. The purpose of such contemplations is to broaden one's view of things. It's helpful to pause and contemplate appearances, since appearances can be deceiving. How something appears at a glance might not be the way it is, when one stops to examine the situation with intellect. It's the mind that organizes speech and behaviour in the world.

Once one begins to understand and appreciate the invisible mental world, one could contemplate it. One could meditate or look at the mind and see what happens, as opposed to tuning it out and acting as if it doesn't matter. Mind is very important, since without mind... well, you can imagine how that would be...
Posted by Lohbado at 2:25 PM