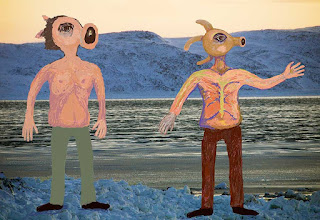 Lohbado from one instant to the next gradually aged and slowed down. He nearly ran out of steam. Lohbado is one of the slowest bicyclists on the road. Keep to the right. Let people pass. At this time of year, there aren't too many bikes out and about. Lohbado rode along Lachine Canal which had more water than in the fall, maybe from snow melt. The ice was mostly melted. It was the warmest February ever and March is also turning out to be quite warm.


Dialectic means there's many sides to every story. Each character has a different version or perspective. There's also the fact of what happened. Each fact occurs against a background. Each fact involves characters and objects, which involve other situations, further information, more definitions. To define terms involves reference to infinite factors of one's past, relationships or contact with others, society, the planet. Everyday life occurs within brackets of one's mental horizon. One functions by singling out things, setting up numerous little goals and perhaps having a general purpose. Lohbado's goal this morning is to return DVDs to the local library and later to attend the Hootenany at Brasserie Beaubien.

Lohbado existed by following a vague narrative. He was born into a story, found a role, pushed the role to the limit, branched off in new directions. Conflict sometimes occurred. Lohbado did his best to avoid conflict. Only argue with someone capable and willing to carry on a discussion. Most of Lohbado's attempts at discussion failed as ego and strong emotions got involved. Statements of emotion and personal bias overpowered matters of fact or reason. In most cases, it's best to say nothing, other than polite chit chat. Be like the birds. Twitter endlessly about anything in general but nothing in particular, other than the cute and superficial.

The dialectic came into play due to the pain of existence. If life was all fun and games, then why stop and think? But after being frequently punished as a boy and being forced to attend church every Sunday and so on and so on. Everyone has a story... blah blah blah. As a boy Lohbado noticed most adults seemed unhappy, stressed, easily angered and insisting you participate in activities that don't make sense and believe in things that amount to not much more than pointless fantasy. Lohbado, then known as Peter Stumps, learned to think with the help of his grandmother Aida Stumps. She introduced him to the work of Plato and to the ancient wisdom of looking at one's mind and examining the nature of self

After her husband the Rev. Woodlot Stumps died, Aida bought a house in the bush, at the end of a rut road, in a clearing overlooking a lake surrounded with dense boreal forest. That's when Peter Stumps began to see the contrast between the short life span of a person and the infinite nature of being. A person's life span could be viewed as an expression of the infinite. There's no problem as long as one doesn't expect things to stay the same or to last forever. In reality, nobody has the last word. Anyway, who cares about you and your little ideas? If you identify with your limited personality, fine. But one could also identify with the infinite. Doing so allows unlimited exploration, creative freedom, imagination and endless fun, even though life is not easy. Even though life can be extremely painful, it's still possible to have fun and be happy sometimes.
Posted by Lohbado at 7:00 PM