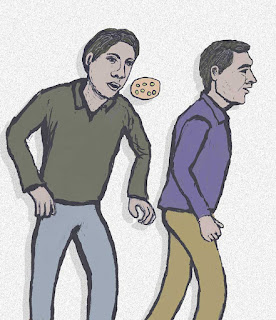 Lohbado's ancestry can be traced back to hominoid civilization, with a touch of neanderthal. Club Morono appears to be the oldest club in the world. The Moronovian religion predates mainstream religions. Cha construction emerged from OOO ooze or suggestive expansion.


Lohbado, born Peter Stumps, discovered his ancestry when keeping his grandmother Aida company, a few years before she died at the age of 80. Aida had the 17th century writings of Isabella Stumps and promised to will them to Peter Stumps, but after she died, the writings vanished. Aida, with guidance from her understanding of Isabella, traced the Stumps family tap root back 250, 000 years to the time of hominoids and neanderthal. His cultural/religious heritage predates Christianity, Judaism and other world religious. However, an oral tradition was preserved, based on the OOO and the Cha. According to this belief system, similar to Plato's arguments in dialogues such as Parmenidies and the Sophist, the OOO and Cha emerged together. Cha is the means by which OOO is described. The OOO would never be mentioned if Cha wasn't there. To talk about OOO occurs via Cha.


Ooo cha also is a way of describing the relationship of part to hole and whole to part. O is the hole from which Cha emerges. Without Cha, there would be no reason to think of the O or whole.

The whole is all that there is. Without whole there would be no cha... there would be nothing, in fact, not even nothing. Without the whole, there wouldn't even be 0 or zero, since zero can only be understood in relation to something. If there were no something, the idea of 0 would never occur, 0 or absence of whatever it was one was looking for.... ooooo cccchhhhaaa ooogaaahhh.

Cha, among other things, represents the chopping sound of Woodlot's axe as it hits a log on a stump... cha cha cha cha. Reverend Woodlot Stumps, founder of the Church of the Living Monument, was grandfather of Peter Stumps (Lohbado).