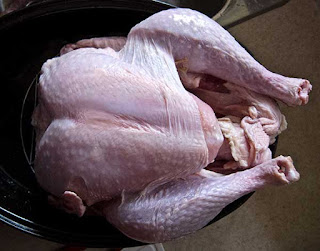 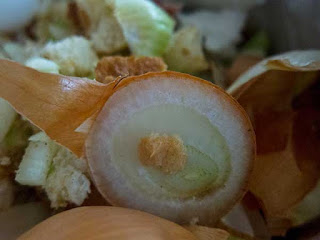 A lot of turkeys were eaten during the Christmas holiday. The Club Morono turkey included a secret onion stuffing.
Posted by Lohbado at 1:38 PM No comments: 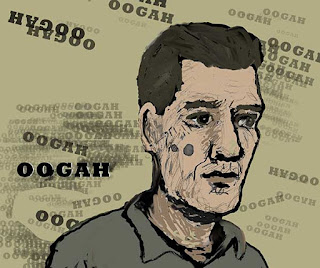 Whatever your belief or non-belief system, Club Morono wishes you all a happy winter holiday. May friendliness and good cheer brighten your week as winter seriously gets underway. Ladies and Gentlemen, boys and girls, let the holiday begin!

Even if you're unemployed, retired, self-employed, a student, in prison, in the hospital, wherever you are, may you feel calm and serene waves for a moment or two, before sinking back into confusion, agitation and drowsiness. May a moment of confidence and clarity, free of hope and fear, glimmer for a second or two.
Posted by Lohbado at 4:19 PM No comments:

the meaning of OOO and CHA

Lohbado was recently asked: what is OOO CHA? Club Morono is pleased to take another stab at this question.

On one level, Ooo Cha originated from the experience of listening to car stereos with beefed up bass. During the nineties, the fad peaked. One day Lohbado was in a second story apartment. A car slowly drove by. The apartment windows shook from the vibrations of the bass. The car stereo released an aggressive, invasive sonic boom up and down the street. It invaded personal space. Even people inside their dwellings were exposed to the heavy vibrations of that bass beat. The rhythm was: ooo cha, ooo-ooo cha, ooo, ooo, cha, ooo-ooo cha...

Lohbado thought: that’s it, the sound of the millennium. OOO is a bodily sound, evoking digestion, the sound of material churning in a container. CHA is a cleansing, spitting, clearing sound, but at the same time, relaxing, like the body sighing as it gets into a hot tub. Then of course, there’s good old ooing and ahing to express surprise, satisfaction and excitement.

OOO CHA also refers to a mythological drama which took place in a dystopian landscape. Aggression and greed boiled over. The Apocalyptic War had devastating consequences. The OOO were a group of administrators and senior advisors, partly responsible for the war, who took shelter under a glass dome in a secret desert. The community was located in the Cha region of the Poh Valley in the Secret Desert. There are many references to this story in older Club Morono posts. Some radiation leaked into the dome, causing the right brain of the Ooo inhabitants to swell, resulting in heightened creativity, imagination and religious sensibility.
Posted by Lohbado at 5:19 PM No comments: 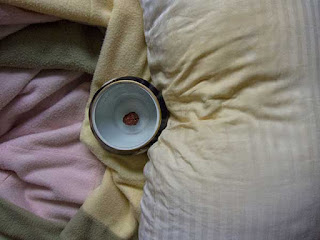 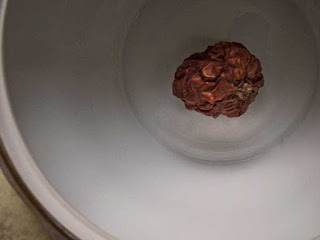 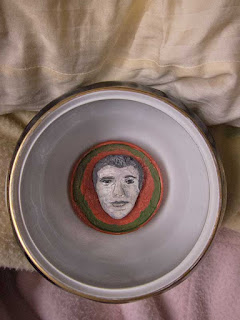 Lohbado was rereading Malone Dies, by Samuel Beckett, then noticed the bed. It fit perfectly with what he was reading. In Malone Dies, a man spends much of his time in bed, alone in a room, although he does have an attendant sometimes, first an old lady, Moll. They have the ultimate unromantic relationship. It's one of the most unique love stories in fiction.

An important part of the setup involves two vases with handles, placed on a cart on wheels. One vase is the chamber pot. The other vase is for food. Each vase is accessible with his hooked stick. He can pull the cart towards him, or push it away with his stick. He can lift the pot by inserting it under the handles.

Posted by Lohbado at 3:31 PM No comments:

what is a thought? 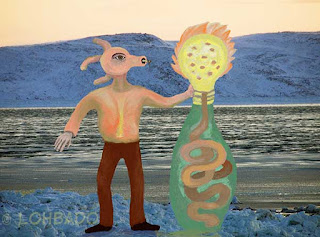 What is a thought? Simple answer: I don't know.

Next question: is it possible to control the mind, or is mind beyond control? Does mind flow relentlessly forward under its own momentum, or can one slow down the speed of thought? Can one deliberately focus the mind and prevent it from getting distracted with discursive thoughts? Can one prevent the mind from spacing out, daydreaming or fantasizing, when one wishes to focus on a set of thoughts or concepts, or to pay attention to something?

Simple answer: I don't know. Have a look and see. Look at what's going on in your mind.
Posted by Lohbado at 2:32 PM No comments: 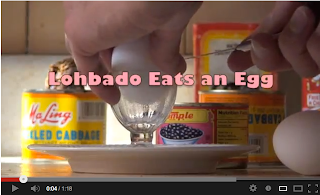 click on the picture to watch the video
Posted by Lohbado at 9:06 PM No comments:

put the hurt on 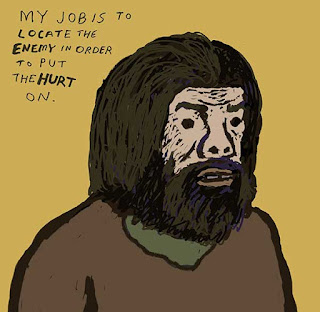 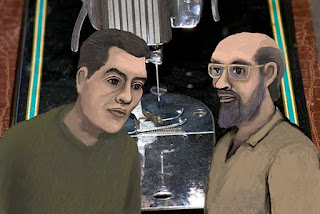 Lohbado found shelter in a house converted into a hotel, the only building left for an entire block. The lone house stood at the end of a heap of rubble. 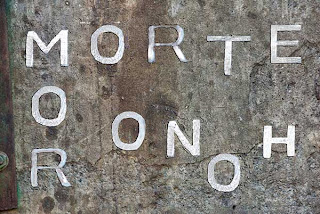 MOR: Positive, negative, Lohbado wrote the root syllable of Morono on a sheet of paper. MOR, give me more, he started with a morbid, dead root and let it flourish into a playful sprawl of Os open to everything and nothing, to oh so wonderful adventures of inner and outer worlds, micro and macro cosmos, concrete and abstract. He wanted to do something positive, but his mind wouldn’t allow that. It wouldn't be sincere to pretend to be in paradise when a hook dragged him towards the gates of hell. While in hell, he would explore and learn all about it.

He actually didn’t go right into hell. He lingered at the dangerous door. He peered into the darkness, smelled the sulphur and heard the weeping, wailing, head banging, chest beating and gnashing of teeth.

Do whatever it takes to stay sane, said a poster next to the door.

First he drank some beer to take away the chest pain, headache and nausea. One beer worked fine for Lohbado to ease the upsurges of sickness. The first sips of cold beer felt good right away.

Posted by Lohbado at 2:44 PM No comments: 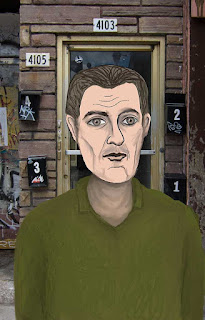 Lohbado went into shock and forgot what he was trying to say. He got confused about confusion and never realized he was confused. A melanoma, blue, brown, patches of green and black spread over the side of his skull and encroached on his forehead.
Read more »
Posted by Lohbado at 11:06 AM No comments: