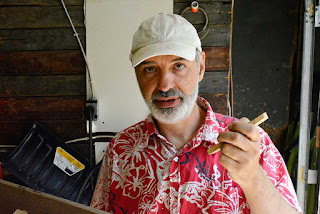 click on picture to see video. Lohbado visited Frédèrick Gemme at work on his seventh skin on frame boat. The main materials were pine, spruce, white cedar and a special rugged twine. The boat is assembled with dowel and twine and a few screws here and there.
Posted by Lohbado at 2:07 PM No comments:

Spill your guts. Look at your guts. Two ways to face the pain. In the first case, or perhaps first reaction when something hurts is to yell: “Ow! ow wow wow wow oW!”
Read more »
Posted by Lohbado at 9:07 AM No comments:

Go to a wide open space, ride the bike to a secluded spot in a lush park. These were the instructions of the Chief Nomroh when Lohbado complained about suffering. The Chief Nomroh said one's life could be a joyous affirmation. Lohbado devoted a session in the park to contemplation the joyous, affirmative aspect of being. To be alive is to experience enjoyment.

A winning feature of Club Morono is the fact that one doesn’t have to keep up appearances. If you’re alone, no problem. No need to impress anyone. However, one still could maintain dignity.
Read more »
Posted by Lohbado at 9:52 AM No comments: click on Lohba image to see video. A wooden handled hammer smashed thin dangerous glass. Thin glass could break while being washed and cut the hand. Thick green glass of a bottle withstood the hammer blow, but collapsed between two bricks. The hammer blow of fate encrypted into the big bang is enacted in this Club Morono ritual.
Posted by Lohbado at 4:13 PM No comments: 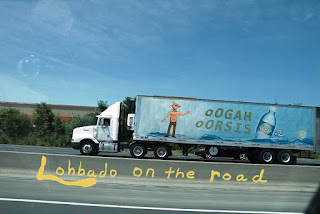 click picture to see video. Lohbado on the road... Quebec City and back, with a stop in St. Hyacinthe.
Posted by Lohbado at 2:03 PM No comments: 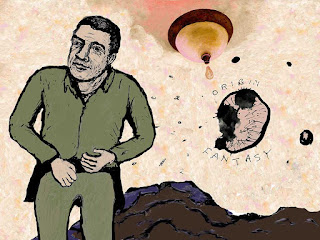 click image to see video. Lohbado woke at 4:30 AM, had breakfast, went for a walk and remembered advice from his grandmother.
Posted by Lohbado at 11:56 AM No comments:

fun on a hot afternoon 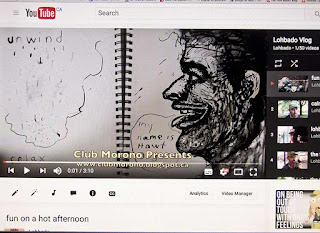 click picture to see video. Sometimes when the mind gets tangled up in confusion, it helps to do a little ritual with food and drink. It's often hard to know how much to explain and how much not to explain. When in doubt, say as little as possible. Focus on doing whatever you set out to do. This is what Lohbado learned at the Moronovian Tabernacle during a session on managing anxiety. Click on picture to see video. It was nice to wake up to a sunny day after the heavy duty rainfall of yesterday in Montreal. A sombre day could influence one to sink into a dark state of mind. The sun broke through dark clouds. Pleasant images cut through the negative chatter as Lohbado relaxed in the park.
Posted by Lohbado at 1:32 PM No comments: 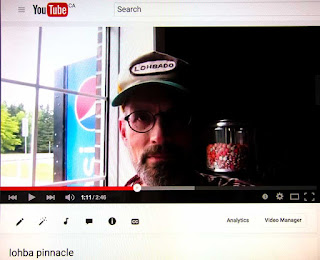 click on picture to see video. Driving the freeway felt like being swept down stream in a river of heavy traffic. Traffic circulation, stream of consciousness, the river of life, two men pulled off the freeway for coffee. In the plaza was a pinnacle machine filled with stuffed animals. Lohbado pondered the nature of success. Maybe success means to be noticed and liked. What exactly is the nature of self? Over coffee and a muffin, the men enjoyed lively conversation.
Posted by Lohbado at 3:19 PM No comments: 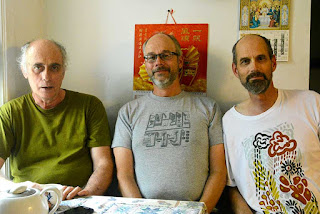 click on picture to see video. Three brothers finally got together in Montreal. They each described something boring from their experience of living for several decades.

Posted by Lohbado at 1:24 PM No comments:

the first riddle of the universe


Lohbado contemplates the mysteries of existence. He mulled over a question from James Joyce's novel Finnegans Wake, what is the first riddle of the universe?
Lohbado reposted the video because something weird happened on youtube. The video wouldn't load. So, here it is again.
Posted by Lohbado at 2:42 PM No comments:

the truth shall set you free


This slogan popped into Lohbado's mind. He sat down to contemplate  the statement. The first question: what does it mean? Lohbado thought of truth in the sense of absolute or ultimate truth, as opposed to relative truth of statements such as 2 + 2 = 4, or Lohbado is wearing a baseball cap. The truth that could set one free suggests an ultimate truth, that has power to affect one's sense of reality. At the Tabernacle, Lohbado learned ultimate truth is perfect, infinite, luminous and inexpressible. Whatever one might try to say or think about ultimate truth would fall short of stating what it is. Contemplating this question could open one's mind a little.

A negative statement is when one says what is not and in saying what is not, one points to what is, without exactly being able to point to it or say what it is. It's not possible to say as a matter of fact what happens after one dies. One forms an idea of death, of what might happen when one is a corpse. One can look at pictures of dead bodies, skulls, all sorts of grim images. Once you're dead, you're not likely to jump up and talk about the experience. If you could do so, you would not be dead. You would still be alive. One might imagine being alive in another form. Whatever the form, there's no such thing as a dead form, if death is defined as absence of life, or dissolving of a form. Do you think if you poked a needle into the arm of a corpse, it would feel pain? If it felt pain, it wouldn't be a corpse, it would be alive.

During a morning walk Lohbado paused to reflect on how childhood seemed rosy. Maybe this attitude was purely sentimental nostalgia. Things sometimes seem nicer in retrospect. From childhood he remembered moments of walking in the bush, when the trees felt like old friends and the flowers seemed to want to talk to him. As he got old, the glow of faded a little. Everyday life sometimes appeared bleak. He yearned for a time, if such a time existed, when things were simple and lively.

The witch in this video, who prefers to remain anonymous, has a dog. In folklore, many witches had cats. This dog, Freddy, is able to see evil spirits. If one takes the sleep sand from a dog and puts it into one's own eyes, one could see what the dog sees. To have dog vision could drive a person loco crazy.
Posted by Lohbado at 8:17 PM No comments: