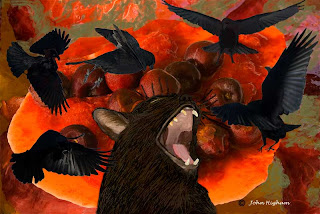 Mother knew the horrors waiting down the road for boys who persisted in playing in the basement with crow spirits, ravens, those huge black, shiny birds of midnight. The grid of time warped and twisted, day became night and night became day. Mother warned me to cease and desist forthwith.

However, I kept going, led on in hope of finding a key to unlock the treasure chest of money, sexuality and supernatural powers. She caught me in the basement one night, a bird shot by the psycho kid from the poor house down the street on the cement floor. She nearly had a fit. I had to explain quickly that I hadn't shot the bird. She wanted to know how I got that bird and what were my intentions.

At first, she gazed at me in disbelief as I explained how the kid down the street shot the bird for target practice and gave it to me to take home and study. Elwin, the youngest of thirteen children, shot the crow with a 22 rifle his father pulled out one night during a drunken rage. She slowly nodded her head. She could understand Elwin doing such a thing, but then wanted to know what was I doing hanging around with a kid from a broken home. And what sort of things was I planning to learn from performing an autopsy on a crow.

I naively muttered something about auguries in ancient Roman religion and about black magic. I figured the fastest way to calm her down would be to keep talking. But everything I said only made things worse. She was doing her best to instill Christian values and didn't expect to see me hanging around with children of sin and then taking murdered bird to perform Satanic rituals in her basement!
There’s a bright side to every story. I told mother how Elwin's alcoholic father had a vision of angels. Just as God tested Abraham by getting him to raise an axe to kill his son and then sent an angel to intervene, so an angel prevented Edgar from running amok. An angel appeared, as Edgar lunged into a drunken rage and threatened to shoot and kill everyone in the house.  As Edgar reached for the box of ammo and the rifle, an angel of the Lord appeared in a flash of white light. The rage of Elwin's intoxicated father miraculously dissolved. Edgar lost control of his hands, dropped the rifle, fell to his knees and cried out, "Forgive me Lord!"
Elwin, who’d been watching through a hole in the closet wall crept in and took the rifle and bullets. His mother, sobbing wildly, raising her hands, moaning, sighing and exclaiming in horror, didn't notice her son take the weapon. She cried in agony and surprise. It was the closest she'd come to tragedy. He'd beaten her and Elwin many times, but she never thought she'd live to see the day when he would reach for the rifle. She couldn't stop shaking as she gazed at her husband in revulsion, but also in gratitude towards whatever it was that made Edgar stop.
Elwin wasn’t fooled by his father's supposed vision of angels. As we walked to the field at the end of the village, he said the visions were alcoholic psychosis. He learned that expression from one time when the cops dragged him off to jail. The cop said it was alcoholic psychosis. Quite a few people had drinking problems in that village. The mill shut down. Unemployment, boredom and frustration increased. This was in the village, where I lived until sixteen. My father, an evangelist to pulp and paper mill workers, the druggist family, variety store, restaurant, a one hotel village; one had to drive an hour to the closest movie theater; my father got along fine there. He was a man of no ambition. I figure he became a preacher to escape the misery and violence of his past. He too had a drunken father.

Elwin took the rifle and said, “Come on, let’s go.”
We walked waist high into the weeds, where a flock of crows were feeding. He raised the rifle and dropped a bird out of a leafless tree. This was late November.
I asked him if I could have it and he looked at me like I was weird. Why would anyone want a dead bird? I explained to him about taxidermy. I’d remove the guts, wear rubber gloves of course and examine the gizzard and intestines for messages.
That’s an ancient ritual; examine bird guts to read the future, make sense of the past, or at the very least, find comforting messages to guide the weary soul lingering down the long and torturous highway of life.
The crow incident reminds me of the sicko grandfather murder case. I better save that for another time. I mean that sicko case everyone in the village knew about and which became a household word for evil, the bad boy who killed his miserly grandfather. They used to say how the old man hid diamonds, in an acid-proof sack, inside his abdomen. A Mexican doctor opened him up, put in the sack of diamonds and then sewed him up. OK, I'm getting off topic.
This is a round about way of saying things were a little off, some kind of bad influence happening in that village to make people go drunk and wild. Mother didn't like that place, but my preacher father couldn't seem to land a job anywhere else. He wasn't able to shine at job interviews. He believed fate was against him and that he was condemned to live in that bush town as punishment for some sins he couldn't remember committing.
The point of the story: mother caught me with a crow, which I planned to examine, stuff and use in occult rituals. Mother screamed and made me bury that bird in the back yard, under a crab-apple tree. She knew enough not to tell father, who would have beat me senseless, in his capacity as representative of the Lord, if he found out.
Mother had me follow her upstairs to her spacious bedroom. She had me sit at the foot of the queen-sized bed and read to her from the Bible, while she stood there, arms folded. I opened it at random and read the passage, Matthew 21, verses 19 - 29, about how Jesus cursed a fig tree, so it withered away.

Mother said, “Unless you repent and beg forgiveness for your sins, you will be cursed and forsaken. Pray to Jesus and ask to be saved.”
Posted by Lohbado at 2:27 PM