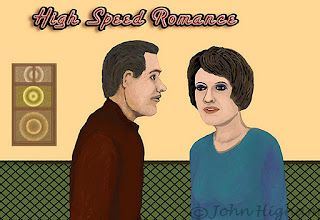 The turbulence of love—  first encounter, plane takes off, get high. Plateau. Wake up to the realization that it could be a long ride. Get bored and restless before the descent. Breakup. Get off the plane. Anger, heartache, disappointment, frustration, man and woman go separate ways.


Love a la mode— meet somebody. Speed, no time. Jump now, talk later. Two weeks and then it gets heavy. When reality catches up, it’s too late. You’re stuck in a relationship, good topic for conversation — “It’s so hard on me. He’s such a jerk.” It happened so fast, like everything.
High speed relationship: You need to download a good browser and buy fast connection, live streaming.
Do you like? Yes, I like. Jane likes. Joe likes. Jane and Joe like. Twenty friends like. Pile like upon like. Joe is doing ____. Jane is feeling ___. Joe poked Jane. Jane poked Joe. Topless Jane in G-string video. Drunken Joe guzzles pint through nose video.
Jane is trending. Joe is oh ho. Jane Babe and Joe Hunk get serious and try to make baby, in utero, adopt baby from Easter Island, baby in a basket. Joe weds adopted babe on her eighteenth birthday.
Jane on drugs. Joe on booze. Anorexic Jane. Belligerent Joe. Rehab. New look. Jane’s new boyfriend and new life. Joe’s hot romance. This one is for real. He’s so nice. She’s perfect. What could possibly go wrong? She deserves it. He deserves it. We all deserve to love and be loved.
They get old and spiritual. She follows Guru Salami Pastrami. Jane declares herself wise and enlightened. Joe finds vital potency booster in teaching of Ding Dong Goorichi. Joe angrily proclaims, in all seriousness, the importance of laughter. Jane, hot with irritation and red in the face, tries to get through to you with calm and serene centering.
Soon get old. Congratulate yourself on making it so far. Time to pamper yourself. Let’s meet at the spa, after the chiropractor, next to the south-sea island herbalist and aura arranger.
Don’t mention death. Be young again. Do the things you were afraid to do when people were pressuring you with so many demands and so much responsibility, texting, multi-tasking, being ON all the time. It’s a real turnoff. Forever and ever amen.
Posted by Lohbado at 4:02 PM