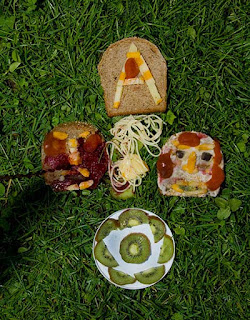 I watched the restored version of an Orson Welles masterpiece, Touch of Evil. This unusual film could be discussed from numerous perspectives, the baroque visual sequences, chiaroscuro black and white closeups of the actors, the tableau vivant qualities, the subversive power of the narrative, which caused film producers to mutilate the film and try to pass it off as a B flick, the surreal, dreamlike tension and psychological perspectives.


Given the title, Touch of Evil, it evoked in my mind the struggle of evil versus good. It turns out, there's not much good in the film. Evil comes across in a sympathetic light. The murderer gets caught early in the film, although the methods of obtaining the confession are questionable. The case is solved. It's no longer a film about catching the murderer. So what's the film about?

The film follows on the almost absurd path of bad guys trying to taint the good guy's reputation, by touching his wife, while the good guy goes on an idealistic crusade as part of his war against drug dealing gangsters. On another level, it's a top dog conflict of two larger than life men, Quinlan versus Vargas, with the princess in the background. Sexual insecurity, or fear of women, lurks beneath the surface of struggling to decide who is the dominant male. As they struggle for male dominance, they have peculiar ways of relating to the feminine.

Quinlan, stuck in a brutal world of corruption and violence, yearns for something feminine, ever since a bad guy killed his wife and got away with it. The death of his wife is an obsession that comes out when he's drunk. When drunk, Quinlan turns to the queen of the subconscious, the Marlene Deitrich character presiding over a museum-like bar, a woman with psychic powers, a kind of mother figure. He's searching for something that she has to offer. Why else would he hang out there, days at a time, sometimes weeks?

Vargas is constantly running away from his wife. The opening kiss lasts only seconds, then the bomb. He talks to her like she's a child, then runs off. Next kiss takes place in the car, as he's taking her to be sadistically tormented at the motel. On a subconscious level, he's offering her as a sacrifice to forces of the underworld, so that he can go off on his odyssey against gangsters. An almost irritated look spreads across his face as he abruptly stops the car on the side of the road in order to give her a kiss, which again only lasts seconds. He's only too eager to jump out of the car and into the police car, leaving her behind, in the jaws of the big bad wolf. The next occasion of intimacy also lasts only seconds. He uses a blind woman's phone to place a call to the motel where she's a virtual captive (he's blind to her needs and to her distress). She begins to express her passion, how the sound of his breathing makes her yearn to be with him. He abruptly hangs up. Gotta go.

Then follows a scene of mental torment worthy of the Marquis de Sade. A family of gangsters torment the woman at a Bates style motel, complete with a psycho Norman Bates kind of night man. Vargas is totally blind to what's going on with his wife. Quinlan underlines this when he asks Vargas, at one point, about his wife and mentions the common sense question about why would a man dump his wife at a seedy motel in the middle of nowhere.

The "good guy" is a poor listener. He never appears interested to find out what his wife has to say. They hurry off before she can explain the lightbulb throwing incident. They hurry off before she can show him the card the gangster delivered. Finally, when she's calls out to him from the fire escape, after waking up to the face of a strangled man, he doesn't hear. He hurries off to defend his honour, to throw a few punches. He's angry about what they did to his wife. He has his status as a man to defend. After he finds her in jail, again, he only stays for a minute and then leaves her. He doesn't show too much concern or curiosity about what she experienced at the motel. He probably figures he knows it all. Maybe he figures she doesn't have anything to say worth listening to. He doesn't want to waste his time hearing what she has to say. He's got to fight the dragon.

So much trouble would have been avoided if they had gotten on the plane, as they intended to do the next day after walking across the border into USA. Vargas insisted on going after the dragon. He never does slay the dragon. Quinlan sort of kills the dragon, as he strangles a bad guy, as Susie writhes and moans in bed, as if having an orgasm. Then Quinlan, who sort of takes on the role of evil, self-destructs. Vargas, the dragon slayer becomes a sleuth, slinking behind, eaves dropping with a tape recorder, wandering in the sewage and sludge, not very heroic.

Vargas comes across as the parody of a hero. After eaves dropping, he races away, with his princess, in a big car. He didn’t rescue her. He didn’t slay the dragon. But he’s still got the masculine grin and determination to show the world who he is.

Quinlan is almost heroic, but then he sinks into the sewage and sludge as he dies. He's certainly picturesque, even monumental. His presence evokes a lot of issues that could be explored, should one undertake a detailed study of this film. He was some kind of a man.