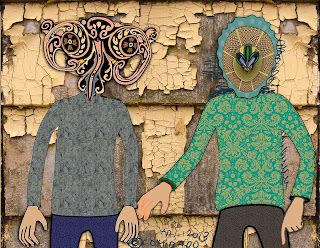 After a week at the house of Ruth Winters, a quiet middle-aged woman, Lohbado picked up hints that it was time for him to leave. Ruth enjoyed Lohbado’s company, but she also needed her own space.

Lohbado stuffed his extra socks, underwear, toothbrush, lined scribblers and The Book of Oogah in his pack and started down the road. He paused to remove a stone from his shoe. If he ever made it to Yamaville, Lohbado would buy new shoes. Many a sole got worn out on the long highway from birth to death.

At fifty-six, Lohbado was confident in his ability to deal with situations. The key to success, according to Lohbado, was the ability to relax. Most of his life he’d been scared and uptight, drifting from one unpleasant surprise to another. As he began to relax, things began to open up and go fairly smooth.

As Lohbado was about to get philosophical, a huge car pulled up. A man about sixty offered him a ride. Lohbado got in. After a while, the man began talking about aimless wandering. He’d seen a lot of depressed looking people wandering the road. The man knew about a place where Lohbado could stay several weeks, no problem, with an old man who’d given up on life, after losing everything.

“He rents the house he once owned. He mismanaged his money and lost the farm. Other people cultivate the fields he once owned. The stove and fridge are broken. The well water hasn’t been tested in years. His wife got fed up and left him.”

The man dropped Lohbado off in front of a tall brick house in a yard full of long grass, weeds and junk. Most of the paint was gone from the wooden framed windows. Lohbado saw huge gaps around the window frame of the window next to the front door. One poke and the window would come tumbling out. Pigeons flew in and out of the attic window under the gable ends. The door wasn’t locked. Lohbado walked in.

A thin man, about seventy, in a black baseball cap with an embroidered white chain decoration around the sides and over the brim got up from the kitchen table. Lohbado said no thanks when the old man offered him a cup of instant coffee. A medium sized grey poodle stood on hind legs and rested its front paws against Lohbado’s knees. Lohbado patted the dog on the head, greasy fur. Lohbado wiped his hands on his pants.

Later he had a look around. The place stank like a barn. The dog used the wall to wall shag carpet in the living room as a toilet. The man slept each night in a huge red velvet armchair in the kitchen. He said Lohbado was welcome to stay as long as he liked. Just watch out for bedbugs.

Lohbado went up a steep set of creaking wooden stairs and found a huge bed with a massive wooden headboard and turrets on the bed posts. A mess of blankets lay tangled on the bed. Empty beer bottles, the remote control of a TV/VHS player, an empty bag of chips, Lohbado took everything off the bed, shook out the sheets and inspected the mattress. He didn’t see any bed bugs.

It got cold at night. The only heat came from a small wood stove in the kitchen. In April, it went down sometimes below freezing. That night, Lohbado piled on the blankets and slept like a baby. In the morning, he sat on the edge of the bed and gazed at the heaps of junk, everything from fishing rods and a tackle box to a metal wash tub with socks and underwear that looked like they’d been there ten years, a tool box full of screw drivers and electrical tape, a box of spark plugs. Spiderwebs, dust and dirt covered just about everything.

The old man never changed his clothes or cleaned himself. His strong odour blended in with the musty vegetable rot smell of the house.  Lohbado had seen worse. He stayed there for about a week. The old man went out every afternoon to the Legion for a pitcher of beer. He would come home and drink beer and then go to sleep in the red velvet throne. It was mid-April, warm enough to sit outside if one wore a few sweaters under one’s jacket. Lohbado meditated on a wooden bench under an oak tree for a few hours each morning. In the afternoon, while the old man was at the Legion, Lohbado worked on his memoirs.

One night the old man said: “There’s something bothering me. I’m near the end of my life and have no heir.”

He paused for a long time as Lohado tried to figure out what the old man was getting at. It sounded pretty serious. The old man was usually incoherent. About all Lohbado could usually understand was the fuck this and fuck that. The old guy loved saying fuck a lot. Mostly, he talked so quiet, Lohbado couldn’t hear what he was saying. From years of being alone, he developed a kind of dialect. Lohbado gradually began to understand the old man’s dialect, enough to get the general drift.

So when the old man spoke loud and clear how he regretted not having an heir, Lohbado knew it was important. After about five minutes, the old man went to the pantry. He rummaged around and knocked over a cookie jar. He kicked aside the broken glass and carried a large box of Sugar Pops breakfast cereal to the table.

“Sure,” said Lohbado, “As long as it doesn’t involve hurting anybody,”

“I want you to promise.”

“I promise to do what is within my means, as long as what you ask is kind and reasonable.”

The old man reached out. They shook hands over the table to seal the promise. Lohbado waited. The old man was silent for quite a while, then stated his request.

“I want you to accept this box of Sugar Pops. It’s yours. Do what you like with it. Don’t tell anybody. I want you to have it.”

Lohbado accepted the box. It was jammed full of letter-sized envelopes bulging with cash. Lohbado gasped.

“This is too much! This is not right!”

“You promised,” warned the old man.

Lohbado laid out the envelopes on the kitchen table. Some of them contained hundred dollar bills. Lohbado counted fifty thousand dollars. The old man was pleased.

“That cereal box has been weighing me down for years. Don’t ask questions. It’s clean. Nobody got hurt. It’s yours. Enjoy!”
Posted by Lohbado at 2:28 PM