Oozing Man on the Metro 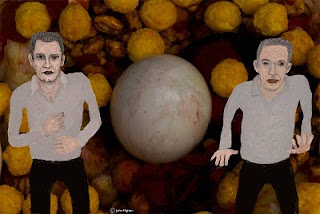 Human drama, or little character situations add joy to taking public transit. Today, for example, on the green line, a little dance occurred as an oozy man brushed against an old man.

While entering the train, Oozy Man, about forty, grabbed the hand of an old man, exiting the train, and did a kind of dance, a dialogue of movement. The look in his eye indicated that he was confident about being right and that most people were wrong. His posture suggested there was nothing he hadn't seen or done, except that which was, in his opinion, not worth doing or seeing.

The old man slipped off the train and into the crowd, his body language saying: What a freak! Keep your hands to yourself! Leave me alone!

The oozy man watched the old man go away, as if to say: I know you brother, better than you know yourself. I've been everywhere and done everything. I've been to hell and had visions of heaven. Believe me brother, I'm familiar with your kind, the old man who doesn't watch where he's going as I rush on to the train.

Oozy Man gazed around and noticed me watching. A self-conscious flicker passed through his eyes. I wasn't supposed to be watching, but I couldn't help it. I often look at things that polite people are not supposed to see.

For example, twice, in the past two months, I saw death happening. In the first case, I turned the corner and half way up the street noticed two paramedics hunched over a stretcher. I paused to have a look at the men, pumping away on his chest to try and get the heart beating or to maybe get him to breathe. The man appeared dead. Then a few days ago, I saw a woman, about seventy, unconscious on the sidewalk. I watched as the paramedics set a stretcher on the ground next to her, lifted her on the stretcher and bundled her up into the ambulance. Her husband held her purse.

I have big, staring eyes. It's not my fault. I'm not an ego maniac. It's biology. I was born with a skeleton body and big weird dark eyes. I would wear tinted lenses, but with my prescription, I was told such lenses were way beyond my price range. So there's nothing I can do about it, except to walk around, staring at things with giant eyes.

I saw how the ooze man had a moment of doubt. Maybe he had been a little impulsive in lunging against an old man and grabbing his hand, an old man trying to get off the train. Maybe he should have given the old man a chance to get off before bulldozing his way on.

At the same time, Ooze Man wanted everyone and especially the old man, to understand the urgency of getting on and off the train as efficiently as possible in order to not jam up the doors, which could interfere with the train schedule. As a veteran of intense action and violent conflict, Ooze Man was all too familiar with the importance of smooth movement of people. I understand how crowds can be overwhelming. It's no fun, if you've been having a bad day, and people squeeze close, invading one's personal space. I try to be positive, imagining intimacy, like it is a kind of dance. We're all jammed together in one big hug. Sometimes a little body contact with strangers is fun. It cuts the alienation and reminds me that we're all humans, funny body-mind continuums, rushing around.

The man looked at me, head tilted back, chin up, chest puffed out, clenched fists, ready to show the world that he was the Mighty Ooze Man. He knew the principles of orderly movement in a crowd and wasn't about to be tricked, mocked, fooled or misled by those who failed to appreciate or understand the seriousness of the situation.

The story ended as Ooze Man noticed a young woman with a large hand held mirror doing her makeup, professional style, artificial tan and all. Ooze Man quickly forgot the old man and couldn't take his eyes off the young woman and her makeup, as if he felt that to hold a mirror and do makeup on a subway train gave him the right to stare at her, with jaded, cold,  hungry eyes.

I got off at the next stop.