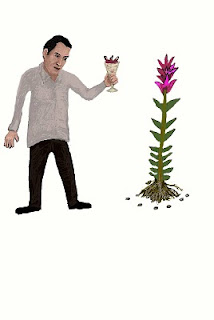 Morono New Year! And what do you mean by Morono? Are you making fun of yourself, or trying to be foolish? On the contrary, the word Morono, according to Lohbado Dialect, means very wise and mature.

The word moron has connotations of being foolish and immature, even, if one wanted to be rude, stupid. However, each definition occurs within a context of its opposite. Even if the word moron did have negative overtones, such implications only occur because the positive, or opposite of negative, exists. Even if you want to go ahead and be derogatory about the word moron, adding the letter O on to the end of the word flips it into a complement, for example, wise, playful and mature.

O is a big, all inclusive letter, incorporating even paradox, such as the incommensurability of a circle with its circumference, ie, a circle is infinite and yet circumference is a finite unit of measurement. O is the all encompassing circle, oneness, the whole world, everything, the good and the bad. Not only does the word Morono contain the letter O, it contains O three times.

The root word of Morono is not moron. The root word is Mor, or more. More means it keeps growing and growing, never satisfied, insatiable appetite. Hunger might be satisfied after a meal, but a few hours later, hunger is back again, kicking away in the stomach. This is only one of many meanings contained in Morono. Morono also contains reference to the word tomorrow. It also pays its respects to the Moravian Unity of the Brethren, a protestant church which originated in fourteenth century Bohemia.

So from this brief discussion you see O is really big, even infinite, expansive and all-embracing. A lot of bohemian artists, writers, dancers and musicians are now members of Club Morono and do Morono Practice. They get together to do the Sacred Dance of the OOOM in On fashion to the ancient beat of No theater.

Examining the word Morono and contemplating each letter is a science in itself. The above picture shows Lohbado making libation to a Morono Cactus. This breed of cactus, carefully grafted from a melange of Christmas cactus and prickly pear and who knows what, I'm not an expert on prickly plants, however, this Morono Cactus did win the User-friendly and Comfort prize at the Lumpkins University Agricultural Emporium of 2009. This cactus contains no mescaline whatsoever and the prickles are soft. In other words, you can bump into the Morono Cactus. You can sit on it, but the thorns will bend, like strands of hair stiffened with lots of hairspray. They won't puncture the skin or create any discomfort.

You can eat as much of the cactus as you like, and you won't get high, although eating the plant is not recommended, except during special Club Morono ceremonies, when participants ingest the psychedelic substance in order to make contact with Oogah and Oorsis, the anthropomorphic representatives of God and co-creators of the universe. Making an offering to the Morono Cactus is a traditional Club Morono New Year's Eve ritual.

In pouring blood-red wine, containing dry noodles (the simultaneousness of wet and dry being a Lohbado Contradiction or Mystery), on to the roots of the Morono Cactus one is acknowledging that the cause of suffering lies in one's mind. As the wine splashes against the plant, the sensitively atuned participant will actually see demons. These demons are nothing other than personifications of strong emotions, such as anger and jealousy, projected outward from one's mind. One's demons appear in a Lohbado Mirror during the act of libation. During this moment, one could understand how one gets upset at people or situations, without really knowing or fully understanding the persons or situations who spark the strong emotions. During this annual Morono Ritual, one acknowledges the difference between the way one feels about things and the way things are. In other words, to jump to a hasty conclusion, for the sake of brevity, strong emotions are generally a coming into contact with demons or projections in one's mind. Pouring wine on the cactus is a way of calming agitation and turmoil.

So with this windy wordy country drive through the psychic smorgasborg of Club Morono, we wish you a Morono New Year!
Posted by Lohbado at 9:16 PM