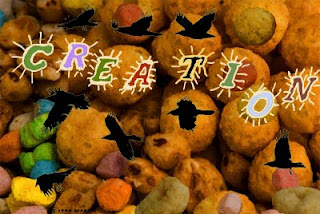 Speaking of creation, here's a nude story on the serial of creation. See the black ravens on their way to scavenge thrown away food scraps at the dump a few kilometers from a northern village.
Sugar puff candied letters radiate meaning. These are the letters Lohbado saw as he banged his head in the toilet of an airline during a moment of turbulence, when passengers were advised to return to their seats, fasten seat-belts, put trays in upright position and safely stow carry-on luggage under the seat.
The plane dropped. Lohbado lurched forward, forehead banging the steel counter of the sink. He staggered backwards and saw letters of the alphabet within stars, revealing the riddle of the universe, going way back into begining-less time, to the impossibility of creation from nothing. And if something was there before creation, then creation never happened. Ok, we're talking about creation of the universe from Oogah's bowl of breakfast cereal.
Something supposedly existed before the universe, according to the secret teachings of Morono. Of course, in Club Morono, nothing is certain. Anything is possible. Gaze into breakfast cereal and read the shapes. This is the nude truth, stripped of wishful thinking and dogmatic belief in one truth and nothing but the truth, so help my Oogah. Thou shalt have no other Oogah before me, but Oogah and Oorsis.
The unbeliever will suffocate in the bowl of eternal sugar puffs. Unbelievers will wander like zombies in Frankenstein monster boots up and down the aisles of shopping centers blasted with background music and periodic announcements about door-crasher specials, management offers, last-minute deals, time limited sales, hurry while supplies still last, on selected items only, and lucky draws. One boutique after another line the aisles of the eternal shopping plaza, where those who did not follow the way of Club Morono will wander aimlessly, forgetting what they were about to buy, after having left the shopping list at home and exposed to flickering, florescent light, and plastic-smelling air recirculated through air vents.
Repent while there is still time. Do not despise lowly Lohbado flakes available at the closest supermarket. Behold the ravens of the air and worms in the ground. They work hard, scrounging around for something to eat. Don't be like the fish, which gets excited and bites the jiggling hook. Beware of false promise of media idols who lure you with honey. There's a razor blade underneath, that cuts your tongue when you try to lick up empty promises offered on high definition, plasma, flat screen, bubbling with advertisement to enrich the producers of things, many of them unnecessary, the corporate controlled world of manufacturing, distribution, advertising and media.
Posted by Lohbado at 2:03 PM