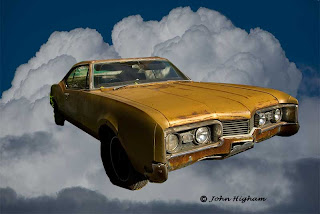 A friend sent an email about slow moving traffic through a tourist region along a famous stretch of salt water. It brought back memories of doing cross country trips with the family, back in the sixties. Every so often, my father would blow a gasket, pull out and pass 3 or 4 vehicles in a row, sometimes forcing on coming traffic off the road, on to the gravel shoulder. He had these dangerous, erratic outbursts, sort of like road rage.

I remember him doing it once when only he and I were awake, the rest of the family sleeping. When it was over he quietly exclaimed: that was close! I thought, jeez, the guy is nuts. I was terrified, especially watching the car coming straight at us. Those were the days of 2 lane Trans-Canada highway. Most people didn't wear seat belts. There would be six of us in a huge Chevrolet. Mother held baby brother in her arms, three children in the back seat.
I had an uncle who also drove wild, back in the sixties. We used to talk about him, in a prophetic tone of voice. My aunt told me about the time she went into shock as she awoke from a nap to see the car slam in to the cement side of a gas station. Fortunately, they escaped with minor injuries. After a couple accidents, he finally squashed himself like a bug inside a crumbled aluminum can as his Volkswagen Beetle plowed head-on into a rock cut.
Of course, after witnessing highway carnage, I decided to drive safely. Death on the highway is a gruesome way to go, in my opinion. In those days, traffic accidents were like circus sideshows. People would pull over on the shoulder and get out to have a look. Cars would be lined up and down the highway, while people milled about, asking what happened, having a look, watching as rescue crews removed the dead bodies. Now days, you're supposed to keep on going, as if nothing happened. It's considered bad taste to look. Back then, I never had the nerve to look.
Once, after my father asked me if I wanted to have a look at a car full of mutilated young people, I felt sick to the stomach and said I would stay in the car and not get out for a look. The next day he told me it was wise to not look, because what he saw was so disturbing, it gave him nightmares. The driver's skull had been pushed in over the steering wheel. A man in the back seat, drenched in blood, rocked back and forth, moaning and in shock. A third body lay face down on the pavement. I'm sure glad I didn't look. Just the thought of it sends shivers up my spine. So much death because the driver got impatient and wanted to go fast.
This raised a question that often pops into my mind: where exactly was it that you were going? What were you going to do with the time gained from going fast? What was so important as to merit such danger? Was the thrill of going fast worth it? This could raise a philosophical discussion about the nature of coming and going and the nature of expectation.
I discovered the thrill of driving safely, slowing down, less stress, to enjoy the scenery. And when the slow lane gets congested, I pull into the fast lane and go with the flow. During tourist season, I like to get up at 4 or 5 AM and do the driving then, when only transport trucks are on the road. That way, the day's driving could be done by lunch time. Pull off at a campground. Set up the tent. Go swimming or whatever.
For reference, one might enjoy reading Crash by JG Ballard, or watching an educational film such as Highways of Agony.
Posted by Lohbado at 11:34 AM