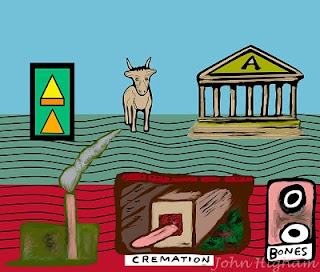 There's nothing worse than waking up in darkness and having to pee. One time I woke up in pitch black and thought the body had become a corpse and that nothing was left but the thought of having to use the toilet. This absurd thought lasted only a few seconds as I stumbled for the light switch. In Greek mythology, there's a dream temple. The word temple is too obviously loaded with connotations, no point going on about it. In Club Morono, the temple provides a giant container where one could sit and listen to the echo of thought, or maybe even try to catch a glimpse of thought itself.
Echo of thought refers to the effect, or reaction to thought. It's pretty complicated. I'm not an expert and so will avoid confusion that might result if I  go into detail. It's simple enough to sit in a room and look at what's going on in the mind.
I enjoy watching the old heaven/earth/hell duality that played such a big part during the first twenty years of my life, before being liberated from the church. In a nutshell, the followers of Nomroh go to Planet Blop Heaven when they die. Morono respects followers of other religions and is not evangelistic. Instead of dogma, Morono presents mythology and suggestions. No Moronite would be arrogant enough to claim to know the whole truth and nothing but the truth so help my God. In Morono, there's nothing to fight about. Planet Earth involves suffering and frustration, where as Planet Blop offers a kind of Santa Claus, tooth fairy place for those who would like to believe it.
When you're stumbling about in the dark, go towards the light bulb. Eva Katz wrote an enlightening book on the subject called: To the Light Bulb.
Posted by Lohbado at 12:18 PM