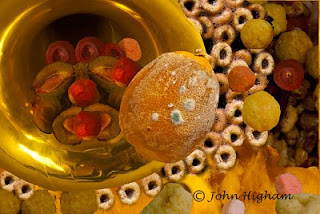 To understand this image and the origin of the conceptual universe with its towers of belief, it helps to remember the famous nursery rhyme: Little Boy Blue go blow your horn/ the sheep's in the meadow/ the cow's in the corn./ Where is the little boy tending the sheep?/ Under the haystack fast asleep.


Rather than jump in and say what might be implied, why not step back and contemplate the cornucopia of a French horn? It looks as if a pilot dropped fruit and cereal breakfast from a plane after a period of turbulence. A moldy lemon, sugar puffs, cherrios, cherries, prunes and peach goo thrown up in the air and left to land, like yarrow sticks dropped to allow one to read messages open to interpretation, what does it all mean?

Maybe one should wake up, stop counting sheep and instead, go milk the cows in order to bring home the bacon and put bread on the table like a responsible citizen. It's not right to sleep like a needle in a haystack when one could be out touting one's horn in the cacophony of the workplace. Everyone has a note to play in the dissonant composition of daily life, a furious sound, filled with signification about nothing, which implies everything and also open, indescribable spaciousness.

And if you like it, it tastes great. And if you don't like it, pretend, or at least try to like it and in this way avoid un-likeability.
Posted by Lohbado at 9:57 AM