I drink, therefore I am. 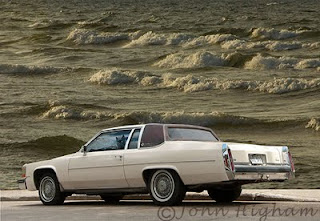 Listen to what happened to Lohbado after taking a ride in the cosmic Cadillac across the mighty bridge, over the river of forgetfulness separating the land of the living from the land of the dead.


The  Cadillac Coup de Ville picked up lost wanderers. Once in the car, the power of the engine sent vibes into their brains. No, it wasn’t the car. Blame it on chemistry, something not right in the brain. Blame it on radiation poisoning, a meltdown of the central core in his brain, causing flashes of light, short deafening bursts of sound. Sometimes his thoughts got too intense, especially at night.

The Caddy drove people across the river of forgetfulness and into the land of the dead. A small yappy dog guarded the underworld. So much poison in a small jar, the dog spit rage and venom, because it didn’t know how else to show its love. That was the dog's way of showing affection, to growl and ghash its teeth.

In peripheral vision, Lohbado witnessed the arrival of devils, closing in on the horizon, dancing devils, dressed in dollar store lace and jewelry. The devil's dance, St. Vitius Dance, Almighty Ergot, son of moldy rye bread and tuna sandwich, with sliced dill pickle. Dance to exhaustion. Once you put on those red devil shoes, you won't be able to take them off until you collapse from exhaustion.

Lohbado knew the spirits were there. It was easy to be fooled, disturbed spirits came on all sugar and cream, confident, all action. The devils sink in the hook and claw. Too late. Where are you going? The devils aren't done with you. It's just begun.

Lohbado knew the signs: difficulty concentrating, manic surges of aggressive and unwholesome thought, intense huger and craving, out of control, over the top, trembling, agitated, unable to sleep, tossing and turning, hot flashes, giddiness, a haze, see stars and hear the popping, piercing, ringing sound from deep within the skull.

The skull becomes a mansion full of carousing, drunken dancing devils. Skeleton figures, clacking their teeth in loose jaws and muttering psychotic gibberish to disrupt one's way of life and to make a person behave in a way that will break up the happy home, beware.

Once in the back of the car, Lohbado sat up straight and regained consciousness. He watched as the car drove up a steep ramp and on to a huge bridge over a wide river.

Nobody said anything, but Lohbado could sense the driver's thoughts. He knew he was undergoing the big journey from one reality to something strange and difficult to describe. As the car mounted the bridge, Lohbado caught a glimpse of his lifetime in the blink of an eye and realized how much time he'd spent in worry and fear of the moment when he would be driven in the mighty Cadillac across the monumental bridge over untroubled water.

The driver laughed. The crossing of the river would cause passengers to forget everything. Without the reference point of routine, the mind would become blurred. Taken out of the familiar, Lohbado wouldn't know where to begin complaining or what to resent. Suddenly the whole set of daily concerns didn't mean anything anymore. Lohbado and the driver laughed. The man and the woman on either side of him in the back seat smiled. Lohbado's head flopped forward as he blacked out.

He had no idea about how much time had elapsed in the state of blackout. It was like entering another dream, as he emerged from unconsciousness, back into the flow of thought. His first thought was about finding the morning newspaper and a cup of coffee. Did he remember to turn off the stove? It suddenly occurred to him that he was supposed to be somewhere in five minutes. He would be required to answer a time-limited, skill-testing question. He hadn't read the instruction manual. If they asked him to run the big machine, he might have an accident. The thought of an accident freaked him out. Maybe he'd already been in one. He scanned his body and couldn't feel a thing. Maybe he was paralyzed. A pang of mental anguish clouded his mental horizon. He felt mental pain, but without physical symptoms, no pounding heart, no difficulty breathing or trouble swallowing.

It suddenly occurred to him: Oogah have mercy, I must be dead! I'm not ready to die. Forgive me, for I have sinned. I'm sorry for the foolish things I did while running around in a panic, trying to find happiness. I should have spent more time stroking the dog and relaxing the cat. How selfish of me to overlook the needs porcupine, skunk, raccoon and to show so little concern for the birds. I needlessly stepped on worms washed up on the sidewalk during rain. There was no need to kill so many bugs. Now it's too late to undo the things I should not have done or to do the things I should have done.

Lohbado made a Nomrohic effort to pull his mind together. He realized the moment of awareness was fading. Once he lost consciousness again, he might never reemerge. He concentrated hard on the riddle of the universe. He felt like this was his last chance to find the answers he was looking for. So many years he'd yearned for the moment when everything would become clear. He'd reached that moment and felt just as confused as ever.

Lohbado lost all body sensation, except for the ability to see and hear. He was no longer in the Cadillac. He awoke to find himself moving down a shady sidewalk, under tall, lush trees. He couldn't feel the ground under his feet. He walked, or floated down the residential street, old houses with small front yards and huge trees. His trajectory down the sidewalk seemed to take forever and to yet to take no time at all. He emerged from the shade into a brightly lit area at an intersection. He gazed across a vacant lot, towards a three-story apartment block, no architectural decoration, a plain brick building, thin window frames, milky grey blinds.

The blinds moved. Faces appeared in the windows. A head emerged, a bald, angry man shouted: "Every morning I order a Trio and every morning you get it wrong. A Trio is a coffee, one egg wrap and ten Morono Balls. Can't you understand?"

A craving for the Trio seized Lohbado. He thought of coffee, egg wrap and Morono balls. He saw a man walk out of Lumpies Donuts, a Trio in his hand. Lohbado had to have it, even though he wasn't hungry. To be seized with craving for food, but to feel no hunger, Lohbado had no sense of digestion, no taste of saliva, no rumbling stomach or writhing intestines. And yet he had to go into Lumpies and order a Trio.

He hurried to the entrance, but was unable to open the glass and metal doors. Anguish, despair and desolation darkened his mind. Soft round pastry balls and coffee, were all that stood between him and oblivion. If he could sink his teeth into something doughy and soft, if he could swallow a gobby lump of sugar and carbohydrates, that would prove he was still in the land of the living. To eat and drink would prove he existed. He wanted to be able to say: "I drink, therefore I am."

Nobody knows what happened to Lohbado after he ceased to be Lohbado. He was never seen or heard from again, until his appearance in the next episode. TO BE CONTINUED…
Posted by Lohbado at 4:14 PM