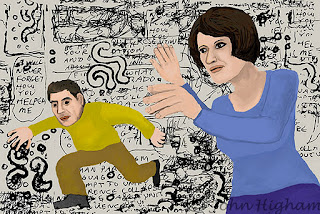 
Jane’s dark shiny eyes and thick hair cast a spell on Lohbado. He could not resist her perky vibes. Jane emptied the contents of a pill jar into a nose tissue and put Lohbado’s worms into the jar. She carefully sealed the pill jar and put it at the bottom of her purse.
She handed him her card, Helminthologist.
“I’m a worm specialist,” she explained, feeling self-conscious as other people in the gray waiting room watched the little drama.
"I’d like to examine your head worms in my laboratory at Lumpkins University. How long have you been infested?”
“About six months. I was hoping they’d go away. They started going under the skin, right down to the bone. They tickle my skull. I’m afraid they’ll bore tunnels into my brain.”
“Worm trepanning,” cried Jane, “That’s dangerous.”
“I’ve been having weird dreams, more like hallucinations, sometimes, even when awake, I get pulled into a dream world that feels even more real than the waking world.”
“What do you think is happening?” asked Jane, leaning close, so he could smell her dandelion perfume.
“A group of rogue worms wish to overthrow humanity. They’re tired of worm status and wish to mutate into human form. The worm population is divided on the issue. Most worms say its too much fuss. They want to be left in peace to wriggle and writhe. The rogue worms swelled to twice the size of normal worms. The swollen worms feed on corpses in graveyards. They also attack people like me. They go for the brains. Once they get at the brains, they’re able to absorb elaborate chemistry, which I do not understand, things like synapses, dopamine and endorphins. This gives the rogue worms the ability to think and be aware of their surroundings and their low status.
“They decided to go human. Once human, they would take control of government and financial institutions and rule the world. The worms know they can’t, in themselves, become human. But they are capable of metamorphic transmutation, in other words, to take possession of a human host and to make it theirs. The king worm actually succeeded in taking a man’s will and making it his.”
Jane was blown away. She knew Lohbado was hers. She would not let him go until she got to the bottom of the worm situation. She insisted that Lohbado wait for her and then they would go off together.
“Forget Dr. Mamon. I’ll take you to the lab and run some tests. I’ll free you of those worms.”
Lohbado waited while Jane went in to see Dr. Mamon. Afterwards, Jane took Lohbado to Chinese Choice Restaurant for chicken with rice take out. When they got to the science lab at Lumpkins University, Jane injected glibbery-goo into his head, forcing the worms to withdraw. Within an hour, the worms left Lohbado’s head and were imprisoned in a glass case, where Jane could study them.
Posted by Lohbado at 8:34 AM