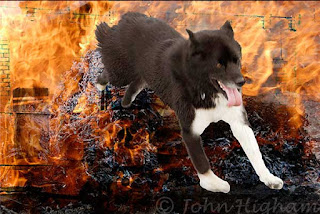 Lohbado sat at a small table by the wall in the Hotdog Palace Restaurant and ordered a hot dog, all dressed, from a man standing in the aisle. That was a big mistake, with fiery consequences.


“I’m gonna make you eat those words boy!” growled the burly man, mid thirties, neck like a bull, thick brown hair on a rectangular head.
“Don’t you work here?” gasped Lohbado, realizing he’d mistaken one of the customers for a waiter.
“Nobody likes a smart ass,” said the man, suddenly grabbing Lohbado by the collar and dragging him to his feet.

He slammed Lohbado against the wall. Saliva sprayed from his lips as he described what he’d like to do to Lohbado. Lohbado pleaded for mercy. He was tired. He’d been walking for six hours. He was a veteran of the dome. When the thug heard Lohbado was a dome veteran, he let him go.
“This is your lucky day,” he growled, “I was about to smash your jaw, but I can’t do that to a dome veteran, not to somebody who got in with the OOO. I bet you did a lot of Cha in there. I’m giving you exactly ten seconds to get out of here. Don’t ever let me ever see your face again!”
Lohbado ran down the street and turned right into a strip mall, where he could take refuge in the stream of people loitering outside the shabby boutiques. A gust of wind and rain hit him in the face. A woman struggled with her umbrella. The wind tore it inside out. Twisted umbrella, no more good, throw it in the trash. Lohbado gazed at the supermarket, at the end of the mall. The cloud burst lasted barely a minute. He cut across the parking lot and took a road leading to another part of town. He wandered through the mist, along a steep sidewalk. Visibility was reduced to five paces ahead. He had to pause every minute to catch his breath. Every few minutes, a strong gust of wind punched him in the stomach. Lohbado didn’t care about the cold wind and moisture. He wanted to get to the abandoned neighborhood a man in the post office told him about and take shelter in one of the repossessed houses.
As he reached the top of the hill, an orange glow lit up the street. Brown smoke leaked through an upper window of a two story house. The houses on either side were boarded up. As he approached, he heard a whimpering sound of someone or something trapped inside. The fire seemed to have started not long before Lohbado got there. It was still contained to the upper floor. Lohbado grabbed a rock and smashed the front door handle. The front door popped open. A gust of toxic fumes nearly knocked him off his feet. Lohbado held his breath and hurried down the hallway towards the noise, which grew louder.
He kicked open a door to find a medium sized mutt standing in a pool of urine. As soon as the door was open, that dog ran full speed down the hall and out the front door. Lohbado tore after the dog. Outside, the dog pressed against Lohbado’s legs and licked his hands in gratitude for the rescue. The dog didn’t even have a collar. With the heat and fumes, Lohbado didn’t dare go back to check for other creatures in there. About three minutes later, the fire reached the main floor. Flames enveloped the entire house.
The dog tried to climb on Lohbado’s lap when he sat on the curb to catch his breath. Lohbado put his arms around the dog to calm him down. The dog licked Lohbado’s face and whimpered. Lohbado spoke softly to the black and white dog. The dog wanted to get going, but not without Lohbado. To please the dog, Lohbado got up and walked down the road, away from the burning house. The dog walked by his side.
They walked about fifteen minutes, towards another suburb. Clouds thickened and it began to pour. Lohbado and the dog got soaked. The dog followed him into a gas station convenience store. Lohbado told the woman behind the counter about the house on fire and how he’d rescued the dog. The woman cried in horror.
“That’s Jenkins house. He must be dead. He wouldn’t have locked the dog in a burning house if he hadn’t meant to do something bad. He probably burned upstairs in the fire. I knew we shouldn’t have left him alone. He was all shook up yesterday when the company closed and he lost his job. The rubber company rolled as far as it could and gave everyone the elastic. Roy Rubber made rubber things that could be made for half the price in China. The company did specialty items for Internet stores, mostly adult material. Jenkins tried some of it on me. I can’t believe it. We better call the fire department.”
She picked up her cell phone and dialed emergency.
“There’s a fire on Ripum Road, Jenkins house. We got a man here who deserves a reward. He pulled a dog from the burning house.”
The woman offered him a free beer and a tuna sandwich. He sat down at one of the small tables by the window. She opened a can of Irish stew for the dog. Lobhado marveled at how in the space of an hour he went from nearly having his jaw smashed, to being a hero. Louise couldn’t get over how Lohbado had been so brave, going in there to rescue a dog. She texted and twittered her friends and took a photo of Lohbado to post on her Boodledum Page. Within minutes, a Honda Civic pulled up. Reena came in to admire the brave man. Lohbado ended up staying a week, with Louise. Reena adopted Jenkins dog.
Posted by Lohbado at 3:06 PM