to get it right 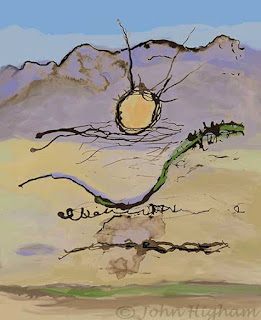 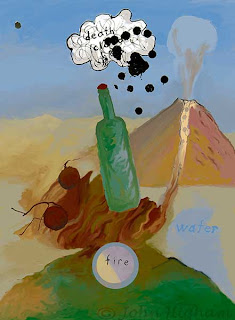 When Lohbado got back to Yamaville, after six years in the Dome, he had no desire to make a splash. He’d already rocked the boat, pushed the wrong buttons, opened a can of worms, whipped up a storm and stepped into a bees nest. Stung and expelled from the hive, his only ambition was to relax and record sporadic messages and diagrams from the Great Nomroh.

During the first year of change, Lohbado wandered across the Plains of Radiation in search of a place to settle down. He stayed with whoever invited him in, or else at hotels and motels. Sometimes a person picked him up as he walked along the highway. He had to be careful to avoid sexual predators, who would hop anything that moved, no matter how young or old, no matter whether male, female, cat or dog. Usually loneliness caused a person to stop. They could tell at a glance that Lohbado was calm and didn’t smell too strong. His warm and friendly voice put the motorist at ease.

Lohbado got a ride in a Honda Odyssey. A senior citizen had just lost his wife and was driving aimlessly, staying at motels and camp grounds to deal with his sorrow. He didn’t have to worry about money. He spoke highly of nature, the therapeutic value of sitting at the edge of a lake in the evening and then sleeping in the back of the van.  A few hours later, Lohbado got out just outside a town. He shook hands with the senior citizen. It was time to find a place for the night. He preferred stopping in mid-afternoon, in order to have time to take it easy. They wished each other well. The van continued down the two lane highway.

Lohbado walked down a rut road into the forest, past some cottages. The trail branched off into various parts of the bush. Lohbado took the road that appeared the least travelled, with weeds growing waist high on either side of the ruts. Lohbado walked about fifteen minutes, until the road abruptly ended in a clearing in front of a plain, two-story wooden house. He used the blade of  a jackknife to unscrew the padlock, fastened to the outside of the front door. The screws were fairly easy to remove from the soft, weatherbeaten wood. After removing the padlock, he screwed back the screws into the door frame in order to not lose them. Before leaving, he would screw the padlock back into place. The owner would never know somebody had entered into the musty house.

Lohbado went up creaking, wooden stairs to three bedrooms. In each room, beds were neatly made up and covered in dust and dead flies. He sat on one of the beds and gazed out the window, at the clearing below and at how the ground sloped upwards towards exposed rock and a meadow of wild flowers at the foot of the forest. It was so quiet, he could hear ringing in his ears, the sound of a soft breeze and two pine trees rubbing against each other as they gently swayed back and forth. Downstairs, he found cans of spam and beans in the cupboards and a sack of rice, everything to make life comfortable. He had a loaf of bread in his pack.

Lohbado made a tuna sandwich and then ate it by a window, where he could admire the white pine in front of the house. After finishing a cup of instant coffee, he went out to explore the forest of pine, spruce, fir, and birch. He walked barefoot down a path, over pine needles, exposed roots, and small plants. The trail opened into an escarpment, overlooking the lake. He saw a man in the distance, an easel set up, a box of oil paints on the ground, a palate and paint brush in his hand. Lohbado waved, and smiled to let the man know he wasn’t dangerous.


The man, about sixty, didn’t look too happy. He snorted and grinned through his teeth, as if to say, Ok, cut the friendly guy crap. What do you want? Lohbado ignored the man’s grumpy vibes and extended a warm hello. The old man felt flustered.

“I can’t get the color right,” he said, scowling at the canvas, the kind they sell at art supply stores, a thin layer of thinly primed canvas glued to cardboard, with paper glued on the back, Canvas Panels, Specialist in All Styles. Lohbado saw the man's name on the back of the canvas, Alexander. Alexander wanted Lohbado to have a look.

Lohbado looked at the drab colors on the canvas, a chalky blue sky, muddy lake and a mass of dark green to mark the opposite shore. The old man stared at Lohbado to see how Lohbado would react. Lohbado was careful to give an encouraging smile and nod.

“The teacher said to paint what I see. But this doesn’t look like what I see,” complained Alexander.

“As long as you’re having fun, does it matter?”

“Of course it matters. I want to get it right!”

Lohbado put the canvas back on the spindly easel. Alexander waved a palate knife towards the lake and made a threatening gesture towards the sky. He wanted to put in the clouds, but the clouds kept changing. The white came out gray. The paint kept smearing. Alexander was ready to throw his paint box into the lake.

“Don’t do that,” said Lohbado, “If you don’t want your art supplies, give them to me. I wouldn’t mind painting a picture.”

“Are you an artist?”

“No, I’m a veteran from the dome,” said Lohbado, "They didn't renew my contract."

“Here, go ahead. If you think you can do better than me.” Alexander reached into a leather case and pulled out a blank canvas and handed it to Lohbado.

Lohbado put the cardboard-backed canvas on a rock and squeezed some red, yellow and blue on a slab of gneiss and granite. He took a medium sized brush and covered the canvas in beige. He then painted three circles, zeroes or ohs, in red, yellow and blue. Alexander’s face reddened. His white hairs bristled as he removed his straw hat to wipe away the sweat. His mouth tightened into a grimace. He looked at Lohbado.

Either Lohbado was making fun of him, or else he was just plain nuts. Maybe it was because Lohbado lost his job. That must be the reason. To be out of work would hit a man hard, leave him feeling castrated or impotent, a sense of failure. Lohbado wasn’t young either. It must have gone to his head. The poor guy is nuts, funny in the head, decided Alexander. That makes sense. Just let him play with the paint. Don’t say anything. It’s a real tragedy when a fully grown man goes nuts.

Lohbado could tell Alexander thought he was crazy. He knew it would be foolish to try and explain what he was painting. He’d done that before. Whenever he patiently explained what his pictures were about, people tightened up, sucked in their breath. Smiles froze. Eyes glared as they waited for him to finish, as if he were telling a rude joke. Dead silence usually followed. His words left people so flabbergasted, they didn’t know what to say. Lohbado knew it was best to act dumb. It felt good to swish a little paint around, to paint the identification symbols used by those who worked in the dome, the zero zero zero, or OOO, the people of the OOO, as in moon. Nothing to sneeze about, OOO Cha! Oh boy oh boy oh boy!

Dr. Jane Wormsly warned Lohbado more than once about putting too much into nothing or zero. He remembered the night she lit a candle and invited him into her bedroom. The candle represented the vertical one, part of the zero and one binary, duality, nonsense. Not enough sleep, mental decomposition, lamentation, pain, I can’t go on, sure, you will go on. Physical pain, whatever. Relax. If O gets carried away, draw a ladder inside, a ladder out of the hole. Lean one against the side of the zero hole. A game with zero and one Lohbado didn’t dare tell this to Alexander.

Afterwards, the old man invited Lohbado to his cabin, at the end of the other trail. They enjoyed a few beers inside the screened porch, as mosquitoes struggled to get in. Lohbado wanted to tell Alexander about the way of Morono, but he didn’t dare. Lohbado wished he could shine the way the Chief Nomroh shined during the inspirational sessions at the Morono Tabernacle. Club Morono members were happy to find, at last, a warm hearted person who would accept them as they were, blemish, weakness, failings and all; someone who would listen and comfort them.

Soul seekers swayed back and forth on wooden benches as they did the OOO Cha ritual sacred to Oogah and Oorsis, anthropomorphic representatives of god and co-creators of the universe. They stared at candles and incense from the new age bookstore down the street and began chanting OO, as in moon. It sounded like wind blowing through pine, spruce and birch trees in winter. The Cha repetition evoked moose and bear running through the undergrowth. Together, the Oo Cha, oo oo cha, oo oo, cha; created a tap rap rhythm of repetition, deviation, reconciliation, chorus and dissonance, a monumental outpouring, or emotional release to the Great Nomroh.

Around midnight, Alexander gave Lohbado a flashlight, so he could find his way through the forest, back to the house where he planned to spend the night. The old man let Lohbado go, after Lohbado promised to return for breakfast the next morning.
Posted by Lohbado at 5:53 PM