Soul Mates of the Moment 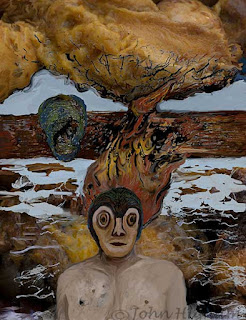 Upstairs, in the Morono Chapel above the laundromat, lost wanderers sat in dim light as candles burned to summon spirits. Candles burned on either side of a plate of rock, little pieces of coal, quartz, nickel, a sliver of silver and a lump of gold. So that’s the setup: plasma, miasma, orgone streaming, excess Cha, Ooo release.
Lost wanderers survived the blast, with radiation mutate side effects: large eyes; a smooth, semi-hard plastic skin, more like a shell, replaced skin burned off the face. Lohbado went to the chapel soon after he met Dr. Jane Wormsly. There are several versions as to how Lohbado met Dr. Jane Wormsly. Lohbado, sporting a beard, had just returned from the Domed community in the Secret Desert. He received the name Lohbado, as he sat on a bench at a subway platform and waited for a train. As the train approached through the tunnel, Lohbado had a flashback to a time, long ago, when buffalo roamed the plains, where deer and antelope played. The approaching subway train sounded like a herd of buffalo, thundering across the plains. Buffalo breath made oh and ah sounds. L was like the line, the rail carrying the train. Soon it came together to form the word Lohbado, which exploded in his mind like fireworks, where it echoed for about five minutes: Loh-ba-do.
Lohbado sat in the chapel among the lost wanderers and contemplated the orange sherbet-beige walls, visceral, moist, similar to squashed, over-ripe mangoes with red wine splashed on top. The lost wanderers hoped to attract spirits. The wanderers sought direction, new roads, new vistas, variations on a set of sense stimuli. Voyagers of the five senses, they sat in the chapel to allow drowsy, agitated confused mind to settle. With a clear mind, they would find purpose to guide them during their wandering to corpsehood.
They lit candles, set fire to a small lump of coal in a cast iron dish and sprinkled leaves on top. A moaning, hunchback, turkey-neck, dangling armed spirit shuffled with resignation and defeat into the wood-paneled chapel. Dark veins rippled through the varnished oak, wood grain, seething lines of vitality, vital spirit, orgone, power of nature, a tree turned into wainscot to beautify an otherwise dreary room. The spirit appeared in the oak wood grain, which turned into a vast plain of dark lines. The lines melted back into the room. The spirit gazed around wide-eyed at the wide eyes of the lost wanderers.
Downstairs in the laundromat, where according to one version, Lohbado first met Jane, or maybe it was their second or third meeting. Obviously, during a relationship, each separation would end with a meeting. The meeting place need not be the same. Lohbado said the first meeting occurred in the waiting room of a doctor’s office. How they first met is less important than the fact that they met, made contact and became a couple, an amorous molecule composed of Lohbado and Jane atoms. They formed a molecular compound to expand their little universe; expansion, melting, streaming, moisture, sweet sensation, a feel-good, heart-warming love story, not destined to last forever.
In classic love stories, instead of splitting up or getting divorced, the lovers often experienced tragic death, due to conflict of religious or political ideology. Lohbado and Jane admitted up front, they were in it for kicks, to ride the high and coast through the plateau. After, they could evaluate the situation and decide if it was worth the effort of getting used to the irritation of having to deal with each others habits and limitations. They could decide, after the biological drive became satiated, if they had enough in common to make it a go, a long-term deal, on a level of friendship or shared sense of purpose. Or maybe they’d wake up and have nothing more to say. They’d go separate ways. None of this was certain at the time of their romance, a love made in heaven, soul mates of the moment. Being in love means you don’t have to explain. Should they begin living together, then they would have plenty of time to communicate and work things out.
Large eyes enabled lost wanderers to see wandering spirits or lost souls. While Lohbado concentrated on the plume of smoke rising from the herbs burning on the lump of coal, he saw the spirit of a crest-fallen grandfather, wearing a world war one army tunic. The ghost removed the green woolen jacket to reveal pale, greenish skin on his chest. His thin lips moved. At first, nobody could hear what he was saying. He kept muttering a word. His body began to fade into the smoke rising from the herbs burning on the coal. Lohbado leapt up to get closer, so he could hear the word of the spirit. Within a dry rattling sound followed by a lightbulb shattering pop, Lohbado heard the word. The word was LOVE. And they lived happily ever after.
Posted by Lohbado at 3:00 PM