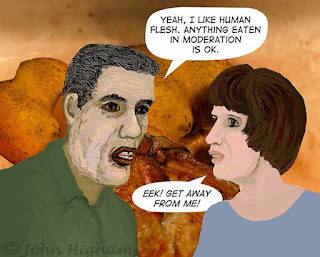 The next night, Lohbado and Jane ended up at the house of a cannibal, Morty Blood. Eating books is bad enough, but when it came to human flesh, that's when Lohbado and Dr. Jane drew the line. Morty didn't insist. He even hesitated in bringing up the topic. He definitely knew it wasn't a good thing to do. He blamed it on the food shortage. There's no telling what a person might do when really hungry.


Lack of food, insomnia and radioactive contamination were to blame. Morty was there the time Hank went berserk and drove a tank through a shopping mall. Morty was a coroner. His job was to go in after an attack and participate in documenting the situation. He identified corpses, filled out a death certificate and signed whatever versions of the situation the commanding officers asked him to sign. He had no choice. He once had to flee a region after receiving a death threat for contradicting a superior, who murdered a man during a game of Chinese checkers. Morty was in the next room. A couple bullets went through the wall. Morty started talking about it, then abruptly stopped and said it was dangerous to talk about such things.

"It's too sensitive," said Morty, as he sat across the kitchen table from Dr. Jane Wormsly and Lohbado, across plates of what appeared to be chicken chop suey. It certainly tasted like chicken. During the early days after the war, a person learned to eat what was on the plate and to not ask questions.

"People died for a huge variety of reasons," said Morty, in response to a question from Lohbado, "It's not something I like to talk about. Just remember, one day, your body will be a corpse. Everybody dies. Even celebrities and rich people die. You'll be dead and forgotten."

"I want to be remembered for my thick head of hair," said Morty, "I want my hair remembered the way it was before it turned grey."

Jane  shrugged her shoulders. After a few mouthfuls of chop suey, she confirmed that it was indeed chicken. Morty was just trying to scare them with his talk of human flesh. Jane knew there were a few rare and extreme cases of people resorting to cannibalism, for example, when a bus got stranded after a road got knocked out. A group of fifteen passengers were stranded for two months during a nuclear storm. There was nothing to eat except each other. As a person died, they roasted the flesh. Out of the fifteen, only five survived. Five corpses were eaten and five were mangled so as to be inedible. The five survivors were eventually rescued. They spent the rest of their lives doing inspirational talks about how, when push comes to shove, a person will do just about anything to survive. A person should not be shy about doing what it takes to keep the candle burning.
Posted by Lohbado at 9:11 PM