in search of Lost Wanderers 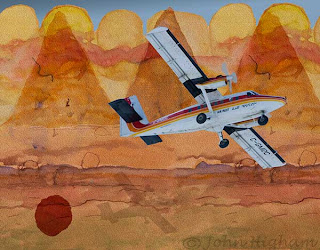 Lohbado was sent on a small twin engine plane to bring back six lost wanderers from the Plains of Radiation. In a state of disorientation, or right brain swelling, they had walked away from the glass dome community of the OOO in the Cha Region of the Poh Valley.

A cosmic force called them to wander across the Plains of Radiation. They were the chosen ones, selected by Oogah and Oorsis to receive revelation and to scream it from roof tops. The wanderers believed a conspiracy kept them from knowing the truth. To find truth, one had to venture into the rock, desert wilderness. The wanderers felt they were special. They were the men and women of action. Before proclaiming their enlightened status, they needed to find the sacred spot on the magic rock hill and place a pile of rock as a monument to the Great Nomroh.
The wanderers got very angry when questioned about their beliefs. One had to use caution when approaching them. They could turn either way, giving you a hug or clubbing you over the head. One never knew until one got within punching range. Then it was too late to back out.
Agents were supposed to know how to deal with such situations. Agents attended compulsory workshops, given by consultants, experts on Lost Wanderers, who had degrees and licenses to make contact. They had never seen a Lost Wanderer except on video. They never had to put their preaching into practice. That was not their job. Their job was to provide techniques, a code of conduct, a series of procedures, a template for documentation, which could then be used to evaluate the agents. Evaluation was a big deal. The fixation on tools of measurement enabled them to alter reality to suit data processing software. Computer summaries laid the groundwork for building an administrative structure of illusion, the illusion of progress and improvement. Declining standard of living and quality of life corresponded with a fixation on generating the illusion of progress. It was part of a huge denial. Attempts were made to sculpt reality to fit the package, which could be processed through systems of standardization. This enabled investors and departmental personnel to feel safe under the protection of the Great Nomroh and the Almighty Dollar. Everything had to be measurable. Everything had to be reduced to standardized sets of statements.
Agents were required to fill out spreadsheets indicating goals, objectives and plans of action. Agents who had made contact with Lost Wanderers on the Plains of Radiation knew the Department of Standardization protocol was gibberish, impossible to implement. It was the work of bored, insane administrators and committees. The best agents totally disregarded the instructions of boardroom experts, whose main objective was to justify their salaries. Nobody expected the problems to be faced. It was about keeping up appearances and paying lip service to the problem. Failure in rehabilitating Lost Wanderers was repackaged to read as a statement about the need for more funding and as a criticism about those whom the department was supposed to help. The wanderers spurned help. Wanderers did not follow departmental recommendations on what was needed for them to adapt to life in the dome.
As Lohbado got on the plane, he knew his mission was hopeless. He took a couple pain killers to help him cope with the change in air pressure as the small, noisy plane took off and landed along the way, two propellors under the wing. The vibrations of the plane went into his nervous system. He looked at how the metal plates of the plane were riveted together as he sat down on the hard seat and fastened the seatbelt. He looked out the window at the rolling plains and rocky ground after the plane took off. He watched the patterns of dried out lakes and rivers. He enjoyed the adventure of being far from civilization.
The plane landed in dim light. A dust storm, about a hundred kilometers away, cast a cloud over the horizon and filtered the sun, creating an eerie, twilight zone effect. He gazed over the pilot’s shoulders and out the cockpit window at the dirt landing strip in the distance. The plane rocked back and forth in the strong wind. Lights and rocks outlined the approach. Lohbado saw rock hills in the distance, leaping up and down, swaying from side to side as strong winds blew the plane about. It took nerves of steel to land a Twin Otter in such conditions. Lohbado watched as the pilot, unable to line up with the runway, pulled upwards, circled around and then tried again. The second time the plane rocked and dropped fast. The plane shook as the wheels made contact with the ground. The body bounced and then stabilized as the plane braked and cruised to the terminal building.
Lohbado bent as he went through the small door and down the metal steps. A cold wind pushed him backwards after he got off the plane. A grain of sand blew into his right eye, causing it to burn and swell. A shudder of nausea and dizziness heated his skull. Flashes of light exploded in his mind as he closed his eyes. He looked at the solid escarpment beyond the airport road. In the noise of the idling plane engine and wind he heard muffled voices, moaning and pleading. He understood how such voices could lure people out on to the rocky desert, where they would get lost, both physically and mentally.

A person became mentally lost when he or she insisted on being privy to strange cosmic revelations and magic powers. Such people became delusional and felt they were acting according to ancient prophecy, which said they would wander out on to the plains, five years after the end of the Apocalyptic War and build a nomadic civilization. The Department of Standardization discouraged peripheral nomadic existence. Such people could become difficult to regulate and control. What disturbed officials most was the refusal of nomads to defer to the Nomrohic Code of Life. The wanderers saw themselves as free spirits. They felt no loyalty towards the Ministry of Standardization Mandate. Instead, they hoped to live a subsistence lifestyle, in harmony with nature.
It was rare that an agent succeeded in coaxing wanderers back to the Dome, where they would be safe. Lohbado knew his mission was a joke. But he enjoyed going out into the wilderness. He’d been through the routine many times. Call up the supervisor on the satellite phone in order to make sure the contact was properly documented, for legal purposes. Unload supplies of food, cooking implements, sleeping bags and tents. The Ministry did not condone nomadic behavior, but knew it would create an embarrassing scandal to do nothing. By making an officially documented token gesture, the department covered its ass. If the wanderers perished on the plains, the department could not be held responsible.
Posted by Lohbado at 12:33 PM