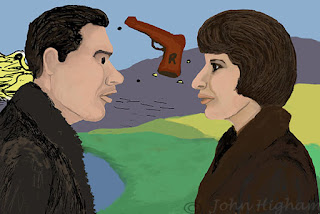 Morono Man suffered insomnia until he discovered the Catatonic Ray Gun. The gun comes with a timer. Place the gun on a tripod. Press the timed trigger, which allows ten seconds to get comfortable in bed. The gun fires a ray of drowsiness. One sleeps like a baby.
The first time Morono Man shot Lohbado with the Catatonic Ray Gun, Lohbado was in the process of stroking a cat. Both he and the cat fell asleep on the living room rug. When he woke up, cat hair grew out of his face. He tried to shave it off. The razor got jammed. It was all over his cheeks, forehead and nose. The entire skin of his head was covered in cat fur.


Lohbado put on his dog fur jacket, hoping that would counterbalance the effect of cat fur. Morono Man fired again to reverse the effect. Lohbado shed all the cat hair. His head returned to normal. Lohbado went back to stroking the cat. He gave the cat a full body massage. The cat purred and stretched out its legs. The cat rolled from one side to the other, so Lohbado didn’t miss anything.


Morono Man thanked Lohbado for allowing him to experiment with the gun. He wanted to become familiar with the gun’s many functions. That gun could prove useful in his war on crime and also in ensuring the safety of veterans, such as Lohbado. Due to radiation poisoning and a swelling of the right brain, veterans sometimes acted in an irrational manner.


For example, one day, Lohbado threw money out the window, during a manic phase after two weeks of insomnia. Morono Man saw Lohbado throw the contents of his wallet, about fifty dollars out the bathroom window. Fortunately, the money didn’t go to waste. A man sleeping under a hedge in front of the apartment building felt the money brush against his face, a gift from heaven. He took that money and bought himself a steak and potato dinner and a pint of beer at Daisy and Bob’s Steak House.


Morono Man came in through Lohbado’s bathroom window. Morono Man waited for Lohbado to pull up his pants and wash his hands. Once Lohbado was back in the kitchen, Morono Man told Lohbado to go lie down. Lohbado lay down on the living room sofa. Morono Man fired the ray gun. Lohbado felt pressure on the forehead and a squeezing of the eye balls. The back of his left hand itched. That was his last thought, the thought of his itchy left hand. He blacked out.


Upon awakening, Morono Man was gone. Lobado pulled out his wallet and saw the fifty dollars back in place. One of Morono Man’s miraculous abilities is the ability to cough up money. He coughed up money to replace the money Lohbado had thrown away. Lohbado pondered the marvelous abilities of Morono Man, but couldn’t remember his own name. He sat on the sofa for a long time, but couldn’t remember who he was or whether it was winter or spring. Lohbado decided to go out. A little fresh air would clear his brain from the overwhelming grogginess that lingered after he woke from the deep, catatonic sleep.


Lohbado put on his dog fur coat and went out to buy a loaf of bread. After the nuclear disaster, wild mongrels multiplied out of control, forcing authorities to cull them. Their fur was used for garments and the meat ground up into cat food, until cats began multiplying out of control. That’s another story.


After Lohbado, in his dog fur coat, wandered half way down the block it started to rain. By the time he got to the store, his coat was wet. In the store, he ran into Dr. Jane Wormsly. Even in his confusion, after waking from the deep ray gun sleep, Lohbado remembered Jane was someone very precious to him. No amount of sleep would cause him to forget Jane. He invited her to have coffee with him at the cafe next door.


Lohbado forgot to buy the loaf of bread. He followed her into Lumpies Cafe. While standing in line, Jane complained that his wet dog fur coat smelled strong. Lohbado felt so sad, tears ran down his face. He’d never cried like that before. Some sort of confusion was going on inside of him. Jane was also acting a bit weird. After Jane carried the tray of coffee from the counter to the table and sat down, she grumbled like an old fart that the server hadn’t filled her mug to the top. Jane rarely grumbled about anything.


Jane wasn’t in a talkative mood. Lohbado wanted to discuss his feelings. He suddenly felt as though he didn’t know Jane. He wanted to connect with her on an emotional level. He suddenly felt sad. Tears flowed down his face. Jane became cold and distant. She wondered what was wrong with Lohbado. Jane touched her jaw and felt stubble. To her horror, her jaw was covered in whiskers. Lohbado’s voice suddenly became soft and feminine. Jane realized that outside forces were messing with their hormones.


Morono Man suddenly appeared, under a cloak of invisibility, at the next table. He could tell Lohbado needed help, but wasn’t sure what to do. Morono Man had an MR (Masters of Procrastination) degree from Lumpkins University.  He avoided action, until absolutely unnecessary. His policy was to hesitate now and act later. Wait until the horse escapes before closing the gate. Often, instead of taking action, he preferred to give advice.


Morono Man witnessed their confusion and realized his mistake. He’d been leaning too heavily on the trigger of his catatonic ray gun. He fired at them again, to reverse the effect. Jane’s face cleared up. Lohbado’s voice deepened again. He grumbled as he noticed a cat hair floating in his coffee. Jane told him to lighten up.
Posted by Lohbado at 10:53 PM