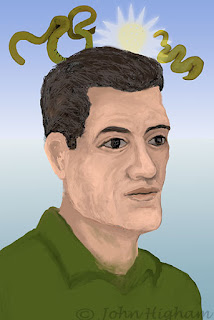 Morono Man’s space ship had a damaged tail light. He sat down at the picnic table where Lohbado and Jane sat. The table was in a small grassy area overlooking the Lumpies Restaurant parking lot.

Morono Man phoned the garage, asked for the supervisor. He got an answering machine. He left a message: “Please call me. I need the light on the space capsule fixed right away. I’m at a table outside Lumpies, waiting. Please, hurry.”
After phoning twice to leave messages, there was nothing left to do but wait. Scratch, fidget, sigh, look around, pace back and forth, or sit still and relax. Lohbado raised his eye brows. He didn’t know what to say. Jane shrugged her shoulders. She had too much on her mind to be deeply concerned about Morono Man’s rocket.
In the lab, Dr. Jane Wormsly had caught a worm infection, a hazard of the trade, quite embarrassing. She had been a little careless in not protecting herself. In the heat of experimentation, research and discovery, she neglected to take a few precautions. Both Jane and Lohbado were infected.
The worst worms were the ones in the stomach. A snake rose up out of the worm heap in the stomach and climbed inside Lohbado’s ribs and went into the skull. The snake unleashed a stream of intense, shouting, insistent, exploding, multi-colored images. The images created pressure inside the front of his skull. He experienced a dizzy, floating sensation of falling into darkness and intermittent light. It felt so contradictory and yet that’s how it happened. Intense fear turned into heat and restless feeling of a sinful nature, resulting in forbidden moisture, such as could be tasted when biting into the forbidden fruit. Voices screamed, hysterically insisting that he cease and desist forthwith. Stop before you ruin civilization and bring about impolite sonic overflow. You must comply with regulation or face official reprimand. What you’re doing is a travesty of justice affecting families and friends of family victims.
A demon came along to seriously discourage Morono Man as he sat with Lohbado and Jane at the picnic table on the grassy area at the edge of the Lumpies Restaurant parking lot. He had some of the following thoughts:
Maybe his space ship would never fly again. Maybe the mechanic would uncover serious mechanical problems. Maybe the malfunctioning tail light was only the tip of the iceberg.
What if the mechanic wasn’t really a mechanic? What if Bill the mechanic was the lead guitar player in an unknown avant garde rock band, which split up after a dozen controversial performances? Maybe Bill was an agent employed to sabotage the rocket.
Ok, you get the idea. Mental scenarios multiplied as Morono Man waited at the picnic table with Lohbado and Jane and their worm infections. Morono Man considered the bleak possibility that he might never use that rocket again. He’d have to cough up money and buy a new one. The doctor warned him about coughing. Coughing paper irritated his bronchial tubes. As for sneezing coins, this led to inflammation of his left nostril. Morono Man would have to use his financial resources sparingly.

While they were sitting there, a grungy man approached and asked them for ten dollars to take the public transit to visit his wife and bring her home. She disappeared three days ago, but was recently found and taken to a shelter. He spent his money over the past three days on taxi fare, as he searched various libraries, restaurants and lounges, following fake leads.
Agents from the Department of Standardization were playing with his mind. It was a deliberate tactic to break his sanity. Agents were concerned that, even though Ernie erased incriminating files from the department computer, he still carried information in his mind. The kidnapping of his wife and the subsequent futile running around from bar to brothel to library to church was a deliberate ploy to stress and confuse him to a point where he would no longer remember a word of what he saw or heard from the days of his employment as an agent of the Department of Standardization.
They were driving him crazy in order to scramble his brains. The only thing that could save his endangered sanity would be for someone to give him ten dollars to cover transit fare for he and his wife.
Normally Morono Man would have been only too happy to cough up ten dollars and put the poor man's mind to rest, but the doctor had instructed him to not cough money for seven days. That’s probably why Bill the mechanic was taking so long to fix the space capsule. Maybe Bill expected a tip, a little financial incentive, to grease the palm, a quick under the table transaction.
Lohbado couldn’t help Ernie. He was flat out broke after treating him and Jane to coffee and muffins. Jane only had a credit and debit card, no cash. Sorry, they couldn’t help him. They caught a whiff of alcohol as the pan handler sadly turned away.
Five minutes later, they saw a fourteen-year old girl drop and smash her Ipod. She burst into tears. There’s nothing that bothered Morono Man more than to see a girl cry. Against doctor’s orders, Morono Man coughed up a few hundred dollars to buy the girl a new Ipod. She stopped crying.
Morono Man began to cough blood. He fell on his back, on the grass beside the picnic table. Dr. Jane Wormsly, who knew the ability of worms to counteract allergies, decided to intervene. She poured a little hookworm powder in the palm of her hand and held it under Morono Man’s nose. He snorted up the gray powder and felt invigorated. He jumped up. In a spasm of coughing, he coughed up a thousand dollars for Dr. Jane and a thousand for Lohbado.
Lohbado and Jane were so excited, they gave each other a kiss. Morono Man coughed up a few more hundred to grease Bill the mechanic’s palm, a kickback to get priority service. Morono Man took off to the garage. Lohbado and Jane lived happily ever after, until the next episode.
Posted by Lohbado at 8:13 PM