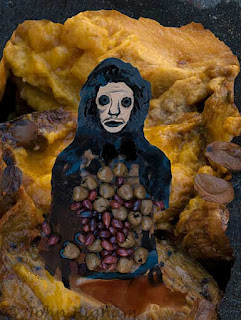 One day Lohbado woke up covered in pencil dust, his eyes nearly swollen shut, after gazing with sinful thoughts at a movie poster, Mary Jane Goes to Easter Island. Lohbado admired the puffy lips of the actress on the poster, the twinkle in her eyes, a giggly look, shiny straight hair. Lohbado recognized the actress. She appeared on the cover of gossip magazines, her little ups and downs as she continued her journey to find happiness.
For about a week, after returning to Yamaville from the Dome, where men and women wore radiation-proof clothing, it was a shock to see so much flesh on display. The protective clothing didn't work a hundred percent. Even with protective clothing, radiation got through. Radiation exposure caused him to have frequent flashbacks to buried memories. His swollen eyes reminded him to tame his gaze. Don’t stare. Hesitate before you leap. Put off indefinitely what you were about to do today. Chanel desire into cool, slightly catatonic schizoid equanimity. Lohbado had no intention of ever amounting to anything, so as to not provoke envy or the wrath of God. He feared the fall that comes after pride. He would rather pluck out his eye or cut off his hand than be led to sin.
Lohbado’s flashback to virtuous resolutions and violent, self-mutilating aspirations went out the window after he met Dr. Jane Wormsly. As he looked at her, she returned his warm and friendly gaze. The swelling in his eyes went down. Waves of relaxation rippled through his body as he held Dr. Jane Wormsly in his arms. She whispered in his ear, secrets of the worm and the transparent temple of shimmering veils.
After spending the day with Jane, Lohbado said goodbye and went home to wrestle with demons all night, squeezing, grinding, pounding, a preview of hell, to pay for pride, arrogance, idle talk, selfishness, greed, aggression and ignorance. Pain started in the big toe soon after he lay down to sleep. His foot swelled, turned red and burned. Poison in the blood practically paralyzed his torso. Each breath equalled agony. The least motion unleashed searing pain. Even heart beat felt like a pounding hammer. Breathing felt like barbed wire ripping into the chest.
He had a vision of his dead father, The Reverend Stonehenge Stumps, in a tour bus driving to the promised land of beer and hard liquor. Background music started up when the  driver turned on the motor. The ghost of Stonehenge cut the wires. Suddenly the bus was filled with ancestors and miscellaneous spirits, a veritable Delacroixian raft of death, complete with Mother Medusa, her forked-tongue children and slimy agents, recommending easy ways to ingest a hard-to-swallow pill. Yellow-beige cream soup in a white, kidney-shaped dish, with a side order of sour mashed potatoes and turnip were provided on trays to passengers of the bus. Devils appeared and started quacking really loud, quack quack and cluck cluck, deafening hen house cluck and duck, moronic intensity, enough to make an oblivious person turn off the radio or TV.
Huge gelatinous blobs bounced to the beat of the OOO CHA sound, code, letters spelling out words to be combined into statements. Bouncing, multi-colored blobs and moronic chanting, OOO CHA incantation caused windows and walls to vibrate. Lohbado began recording the scene on a hand-held portable device.
Shimmering veils, exotic perfume, body-temperature sea-breeze, beautiful forms, soft and smooth, Lohbado fell backwards into a pile of plush teddy bears. He connected with the spirit of the toy store in heaven and looked down on the sweaty shoe store of hell.
The tour guide said: Take a look around one last time. Take one last breath, one last swallow of saliva, one last sneeze, the Lord of Death has arrived to cook your goose, roast your hide, boil your bones as your body becomes a corpse.
Of course, this is poetic license. Everybody knows I’m me; I’m special and can’t die. Even if I die here, I will continue to live there. This is the meaning of immortality. The top of my skull will never shed its magnificent hair cover. I will leave the mega-shopping mall of life to enter the eternal play station of heaven.
Holy Holy Holy Almighty Dollar! Let there be cash, and there was cash in the ticklish temple of beautiful vibrations. And they lived happily ever after. Amen.
Posted by Lohbado at 3:30 PM