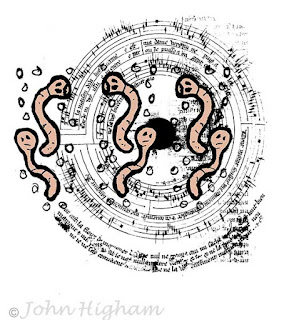 “I’m a total nerd. I wake up in the morning to continue where I left off the day before. There’s no point even mentioning it, other than than to make a point of no point,” said Blair, a thirty-five year old office worker, under his breath, as he hurried to the metro.

He always went to the first subway car, behind the driver's compartment, where he was always able to find a seat. Blair slept all the way there. He knew how to wake up in time to get off. He stumbled off the subway car, went up stone stairs, up the escalators and so on, into a plain four story building. He rode a small grey elevator to the third floor, got out, walked down the ratty grey carpet and into the department. He walked past partition walls to his cubicle. Sometimes a colleague would say good morning. Mostly they didn’t notice he was even there. He felt too shy to greet someone before first being greeted. He avoided people, as much as possible, by hiding out in his cubicle.


He tripped over an extension cord and nearly fell down in his work space. He leaned back in the swivel chair at a small press board desk on wheels. He'd been meaning to sort out the cords for a long time. Procrastinate no more! He crouched down and began sorting out the network of cords flowing from the desk top computer and various external hard drives. He borrowed a roll of masking table from Jason, who worked in the next cubicle. Jason said Blair could borrow the masking tape, as long as he returned it. Jason was tired of lending things out and not getting them back. Blair promised to return the tape. He only needed enough to attach labels to the five, six or seven cords hanging down in a tangle from his computer console. Sorting out those cords kept Blair busy for an hour.
While sorting the cords, a tune went through his head, an advertising jingo for pasta: “Rigatoni, rigatoni, rigatoni’s good to eat. Good to eat, good to eat, rigatoni’s good to eat.”
The circus tune kept going through his head, until his stomach hurt. He carefully tore off small pieces of masking tape, attached them to cords and labeled the tape with a black sharpie marker. When he was done, he went to the staff kitchen, ate a small container of yogurt and drank a cup of room temperature black coffee.


One thing bothered him more than the rigatoni tune. Blair had tried to repress it for a long time. It terrified him to even think it. He was in love; but it wasn’t a normal kind of love. He didn’t want anybody to know, in case they thought him crazy. He was in love with the metro station announcer’s voice.
Each morning, he got on at the start of the blue line. An efficient, friendly woman’s voice welcomed him to city transit. She appreciated that he chose to use public transit. At the end of each day, as Blair got off at the end of the blue line, the woman would thank him for using city transit and invited him to use it again. Her voice, so mellow, rich and evocative turned him on. It filled his mind with pleasant images. He fantasized about inviting her to the blue line food court three stories below street level. He dreamed about how he would buy her for coffee at Lumpies Donuts. He would tell her how much her voice helped him through particularly difficult times of transition during his boring life. He would explain how the friendliness of her voice inspired him to keep going, even when he felt his life was hopeless. He would then ask her to marry him, on condition that she wore her transit uniform sometimes in the bedroom. They would face each other on the queen sized bed. She would stroke his ears with the names of various metro stops. They would play endless guessing games.

In exchange, she could have the diamond tiara that belonged to his grandmother, who died of diarrhoea, while waiting for an operation. He kept it locked in a safety deposit box, for the day when he would discover the woman of his dreams. He knew the fantasy was totally lame. However, it was his most powerful desire, to meet the woman behind the metro station announcer’s voice.
Things intensified to breaking point during the dark days of February. He couldn’t get her out of his mind. He knew that if he didn't at least introduce himself, he would feel like a total loser. There was no turning back. He knew what to do. It was a matter of taking the right steps to arrange a rendezvous. After several days of emails and phone calls, he contacted the sound studio responsible for the recording. He visited the technician. He forwarded Blair's request to Wanda. Wanda had done hundreds of voice recordings to use in advertisements, instructional announcements, such as safety briefings on planes and trains. She even did a few porno voice-overs, to simulate passion. For three seasons, Wanda did the voice of sister Lulu for the cartoon series, Emily and Lou.

The rest is history. Blair and Wanda fell in love, got married and had a girl, who suffered a speech impediment. This meant little Rosie couldn’t follow in her mother’s footsteps and become a voice announcer.
Rosie grew up to be a copy editor. She took a course in technical writing. For years after Blair and Wanda divorced, Blair, after a few drinks, would boast about the romance of his life, how he met the woman behind the metro stop announcer’s voice and how they got married and and had little Rosie, who couldn't announce, but was a professional dotter of “i”s and crosser of “t”s.