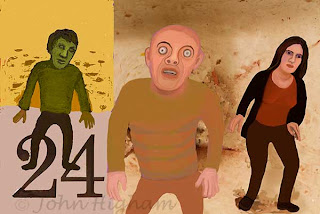 Time lapse, the stages of life, flowed through Lohbado’s mind. He saw, in the blink of an eye, himself as a boy, as adolescent, as adult and suddenly middle-aged man, pushing sixty. Lohbado laughed at how one minute he was young and in the next, old.


Lohbado had attained the phase of life when his body was almost never free of pain. His body felt stiff and awkward as he hobbled down the street for a cup of coffee at Lumpies Donuts. He sat down at a table by the wall and gazed at the carpet of hair growing up along the spine of a woman in a summer shirt, who crouched over muffins at the next table.
Lohbado finished his coffee and walked home. He gazed at the dreary apartment blocks, laid out in chunks, three windows across, three high, above a row of basement windows. He noticed a section of peeled off paint and rotting wood along the roof line above the balconies. Inside the apartments he imagined chipped and cracked plaster, bulging walls, slanted floors, cockroaches, bedbugs, earwigs, ants, moths, houseflies, plus an odd assortment of small wriggling, creepy crawlies, a microcosmos in rot and mildew.
Lohbado breathed it all in. It brought his lungs to life in a fit of coughing. He coughed in a futile attempt to clear his chest of noxious particles.
Gravity made Lohbado feel the full weight of his body, a downward pulling force, gripping him by the ankles. Gravity threatened to pull him face down, nose to the concrete. Lohbado resisted downward falling tendencies. He fought the pull of gravity. He maintained upright posture, which distinguished him from the apes. He watched a dog on a front porch lick itself under the tail, a full tongue bath, with chocolate surprise.
Lohbado felt glad he wasn’t a dog, cat, bird, mouse, worm or grub. He didn’t fall down as he trudged up the sidewalk sloping to his place and down the driveway to the side entrance of his damp cave of a basement apartment. It felt like descending into the grave, where he existed as a living dead. Every night he lay down on a coffin-shaped mattress. Lohbado entered the apartment, stumbled to the living room and collapsed on the sofa. He lay on his back and gazed up through the window at the top of the ceiling. It offered a view of tree tops swaying in the breeze. A cat peered in the window. Sometimes the cat used the little strip of garden in front of the basement window as a place to defecate or spray. Cat hormone perfume often drifted into the apartment, when the window was slightly open.
Lohbado closed his eyes. It felt good to sink into deep relaxation. Chest pain squeezed his rib cage and pushed him into the soft cushions. Finally he could rest in peace. Pain melted. He savoured the absence of pain and the sense of being cradled in the arms of a soft, puffy sofa he rescued from the dumpster.
Lohbado sank into darkness and slept. When he opened his eyes again, he had no idea how long he’d been sleeping. An emaciated man crouched in front of the window, where the cat had been. The man made pleading gestures with thin hands. He opened his mouth and eyes wide, as if explaining his hungry desire to consume something. Lohbado lay there for a while and gazed in fascination at the antics of the hungry skeleton man. He wasn’t sure if he was awake or dreaming. He felt so relaxed, he didn’t want to move. Moving would start up the pain. He wanted his pain-free state to last.
A full bladder poked him in the abdomen. Lohbado groaned, leaned on an elbow, swung his legs over the side and placed his feet on the floor. He stood up, staggered to the toilet and emptied his bladder. He barely had time to zip up his fly, when the skeleton man walked through the unlocked door into the apartment.
To make a long story short, Lohbado gave him a cup of coffee and a peanut butter sandwich. The man melted all over Lohbado in gratitude, as if Lohbado was the most generous man in the world. Lohbado made him another peanut butter sandwich to go. He placed it in a plastic bag. The man understood. He went. Lohbado never saw him again.
But when he got home, the next day, from visiting Edgar, Lohbado found screwdriver marks in the door frame. Somebody had tried to break in. He figured the skeleton man must have come back, after seeing Lohbado go. He tried to break in and steal the rest of Lohbado’s bread and peanut butter. However, he didn’t succeed. Maybe the neighbour, who worked odd shifts in the burn ward at Gore Hospital, got home in the nick of time and chased the burglar away.
Lohbado celebrated his safety with a cup of coffee and, as he did on special occasions, a can of tuna. He opened a can of expired tuna which he bought 80 % off at the flea market. Black bitter coffee cut the strong musty taste of expired tuna and stale bread. Lohbado ate and gave thanks to Oogah for providing him with food and shelter.
Posted by Lohbado at 12:09 PM