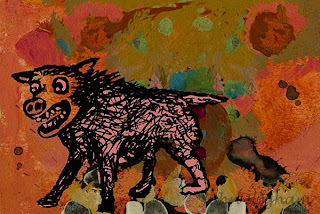 Lohbado and Eva sat quietly at a table by the window in Lumpie's Donuts, overlooking the runway of Yamaville Airport, for about five minutes and gazed at each other. Lohbado saw a tiny reflection of himself in her shiny dark eyes. She placed her hand over Lohbado’s hand on the table. When he leaned towards her, she pulled her hand away.
“I still don’t feel safe," said Eva, "It takes very little to wound Harry Stone's vanity. That dog on a chain is warning us to be careful. Deputy Harry Stone has a big ego and a short fuse.”

The large mongrel barked wildly as a man with binoculars wandered too close. The man raised his binoculars and scanned the sky, then slowly lowered them and leered at the dog, attached by a chain to the radiator repair shop sign. His plastic-looking face barely concealed a violent desire to turn into a monster and devour everything in sight. The black dog lunged at the end of the chain and reared up on hind legs, its front paws clawing at the air in attempt to tear apart the unwholesome hungry man. The man laughed at the fury of the dog, then turned his head towards the window where Lohbado sat across from Eva. A twisted smile spread across his plastic face.

Lohbado looked at Eva’s dark eyes as she watched the man tease the dog. Then he looked at the man standing with legs apart, arms waving, binoculars around his neck. A barely controlled mania glittered in the man’s eyes, as he bent towards the dog, then straightened up and peered with binoculars into the beige ring of smog around the horizon.

“Harry Stone isn’t much better than that man over there," said Eva, "When we first met, Harry showered me with gifts. He acted like a prince. I thought that was a sweet way of him to show how he liked me. I thought if he could be generous that way, I’d be willing to tolerate the fact that he’s fifteen years older.
"I grew up pretty fast. On our wedding night, he hit me. For a moment I wondered if this is what all married men do. I thought, maybe a lot of husbands hit their wives. I was surprised to find out how it felt. I didn't ever think a man who loved me would do that. I was convinced he loved me, because before we got married, he set up a full bank account and gave me a few solid investments. The investments were amazing. Larry gave me insider advice. A few quick transactions and I’m set up for the next ten generations. I don’t have to be a secretary. I do it for fun, so I can meet people. It’s definitely entertaining. But you do get some sleaze balls. There’s something a bit degraded about people who worship money. They’re so shabby and without shame. They have a way of justifying hurtful behaviour, so they come off looking like the good guy, treated unjustly by their victims. I’ve seen unscrupulous men and women ruin those who trusted them. Basically, don’t trust anybody. The Department of Standardization is a cesspool of greed and big egos.”

“So what did you do when he hit you on your wedding night?” asked Lohbado.

“I grabbed him by the balls and squeezed really hard, until he pleaded for mercy. I made him get down on his knees. He’ll never mess with me again. I won that battle, but he’s got control over the set up. I can do what I want, within certain limits, which we both understand without having to come right out and say it. It’s good and it’s bad, depending on how you look at it.”

Lohbado knew it was better if he didn’t make a move. She was clearly in control. Although she pretended to want romance, and gave the impression that she liked him, there was something else she was after. He couldn’t quite figure out what it was. But he knew she wouldn’t be shy about telling him, when the time came.

“I’m not saying it’s all peaches and cream,” she said, after another long silence, “All those drugs Stone took made him superstitious. He has this prehistoric idea about how once you’re married, you can never divorce. Dishonour is worse than death. Big egos are quite predictable, but not always so easy to get around. Harry Stone is narcissistic; he’d have me erased before he’d consider divorce.

“I mentioned divorce once. As punishment, he instructed an agent to drive me to his uncle's farm, tie me to a tree, strip me to nothing but a pair of thongs and apply fifty lashes with a hemp rope. It was total humiliation, to be half naked in front of some yahoo.

“I don’t like cynical people. I respect all religions. Maybe I shouldn’t be telling you this, but while he whipped me, I had a vision of Oogah, dressed in a coarse linen tunic and wool trousers. He held a club in one hand and a silk rag in the other. I watched him approach a grizzly bear. The bear reared on hind legs. Together, they began to dance. By the time they were done dancing, my back side burned. Marvin drove me back to the office. Harry disinfected the wounds with rubbing alcohol and applied gauze bandaids. That was the last time we ever had sex. Harry knew he wasn’t worthy of me. He was too proud to humiliate himself anymore. He knew he didn’t stand a chance. He could win with power, but not with love. As they say, the hand that rocks the master rules the home. Now, the only way he can feel potent is to pay escorts to make him feel like a man. Harry is really quite pathetic. In a way, it’s too easy. Just don’t wound his vanity. There’s always a price to pay.”

Eva realized she was getting a little too excited. She squeezed Lohbado’s hand and even seemed ready to give him a kiss. But then she pulled back. Her face went blank. Her eyes had a scary, far away gleam. She went silent. Lohbado wasn’t sure where to look. He even began to regret that he accepted her invitation. She was way too intense. But at the same time, he wanted to know more. He wanted to be close to her for a long time. He wanted to be her best friend, to lie in bed with her as she talked from midnight to sunrise. Then they’d scratch each other’s back before breakfast and keep going until lunch time. Eva picked up on Lohbado’s vibes. She tried to reassure him.

“As soon as I read the letter of recommendation from Seth Poule, I had a revelation,” she said, “You have no idea how difficult it is to do what you did. I get the top down, administrative perspective. I’ve seen agents like you get squashed. To administration, you’re no better than a cockroach. It’s funny how agents take themselves so seriously. They act so important in the busy little office, so well regulated, a regular ant colony. But it’s rotten. It’s an illusion. It means nothing.

“I know you have no money. You don’t have to hide it. I can see in your eyes. You’re ok. It doesn’t matter. You’re the kind of guy I’ve been looking for. I want to write my memoirs, but it’s gotta be fictitious, so Harry Stone doesn’t sick the Goo Goo Underground on me. I’m not knocking money. Obviously I’m corrupt enough to benefit from shady dealing.”

She suddenly stopped talking as a black 12 cylinder Mercedes pulled up and parked next to her Range Rover. A man in grey trousers and a pale green polo shirt got out. Eva turned pale and gazed into Lohbado’s eyes, to let him know they were in a bit of trouble.

The man entered Lumpies and ordered a coffee and ten chocolate lumps. He brought the brown tray over and sat beside Lohbado and smiled at Eva.

“Harry saw the whole thing,” said the agent, “He looked through the window when you and Lohbado got in the Range Rover. He read the Seth Poule letter of recommendation and figured it out. You should have let him meet Lohbado first, before bringing him here. You know how Deputy Stone doesn’t like it when you hide things from him.”

"So what am I supposed to do?" asked Eva.

"I suggest that Lohbado run for it," said Marvin, "I can cultivate a blind eye. We'll say he ran for it. Then you follow me back in the Range Rover."

"I can't let Lohbado go, just like that," said Eva, gazing in alarm at Lohbado.

He could see in her eyes how little he meant to her, in spite of their conversation. It was all fantasy. The manly thing to do would be for Lohbado to walk out of that restaurant to the bus stop on the concrete island overlooking the grassy boulevard and take a bus to kingdom come.

Lohbado's heart felt heavy as he got up to leave. Of course, it was too good to be true. What did he expect? Did he think a princess was about to stoop to rescue a lost wanderer? What was he thinking? Did he imagine that they would fall in love and live happily ever after?

Lohbado walked sadly out of the restaurant, to the bus stop. He glanced at the schedule attached to the post. A bus would arrive in thirty minutes. He stood in the blazing sun. He had three hundred dollars in his wallet, the clothes on his back and a little back pack containing a bottle of water, a notebook and The Book of Oogah.