episode 4, the romance of Lohbado 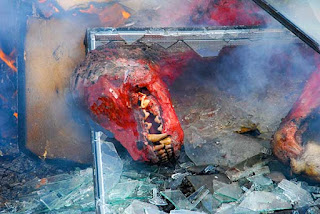 The beauty of sidewalk lies in its concrete nature of leading in a straight line towards the horizon. Cracks, not withstanding, weatherbeaten from hot and cold, snowploughs in winter, heavy rain and extreme heat in summer, the sidewalk provided a pretty patterned surface for Lohbado to stumble along in the heat of late afternoon, after Eva drove back in her Range Rover to Administrative headquarters, to take orders from husband Deputy Harry Stone. After all, she had no intension of ever getting it on with Lohbado. She was merely bored and wanted a little entertainment. There’s something exciting about acting on impulse, to leave the office and chat with a picturesque stranger from a faraway land.


Disappointed, but after all, what did he expect, Lohbado left Lumpies Donuts, crossed the strip mall parking lot to the bus stop. It was fun while it lasted. Eva was definitely a high spirited and delightful woman. He would love to have stayed and developed a beautiful friendship. She was under too much pressure, too many demands from too many people. They had that much in common. They were both slightly on edge; him, after being expelled from the hive; her, having been introduced and married to one of the head honchos, deputy to the Minister of Standardization.

Lohbado gazed at the bus schedule on the panel attached to the pole. A bus would arrive in half an hour. He gazed at his pocket watch and gazed into the distance, at a plane taking off on a distant runway. He stood in the blazing sun and contemplated spending thirty minutes standing unprotecting in direct sunlight. He decided to seek shelter in the shade. Lohbado wandered over to the grassy boulevard that lay between the parking lot of the strip mall and the six lane street along the edge of the airport.

That boulevard was like a beach for plane watchers. People spread blankets on the grass, or sat in lawn chairs and gazed at the sky. A harried-looking woman talked in a grating voice to a friend holding a large plastic cup of soda, as she changed her son’s diaper and wiped his ass with a wash cloth. Lohbado wandered into the shade of a spindly tree and was about to sit down and wait for the bus, when a man with binoculars smiled. The man’s eyes locked with Lohbado’s eyes in an invasive, probing stare. Lohbado quickly looked away. He hurried over to the shadow cast by a sign advertising propane refills and radiator repairs, where the dog on a chain slept after a session of growling and barking. A sixty year old mariner, tattooed arms in a sleeveless shirt, stared at Lohbado, a quick scan from head to foot.

Lohbado realized there was no place for him to relax on that boulevard of people lounging at the edge of aerospace. He didn’t belong in that loosely knit society of sky gazers and lawn loungers. There wasn’t much for the eye to focus on up there in the vast blue. It might be a fine place for a lonely wanderer to sit and chew the fat until sunset. Lohbado was suddenly tired and wanted nothing more than a quiet room and a bed to have a good night’s sleep. He hurried past a couple, in their thirties, with a teenage daughter who carried a coke and a bag of chips. They sat down near a man in a motorized wheelchair. Lohbado admired the dart club logos on the back of the man’s leather jacket.

Lohbado felt painfully conspicuous between sidewalk and sky, as he returned to the bus stop. The plexiglass bus shelter reeked of urine. He gazed up as a military plane landed. The top of his head quickly got very hot. A film of sweat covered his entire body. Fat salty drops oozed from his brow and armpits and between the shoulder blades. Rather than stand there and melt at the bus stop, Lohbado started walking. He walked long enough to fully experience the intense heat of the heatwave tormenting Yamaville. His tongue stuck to the roof of his mouth. He could see stars. His feet burned.

He gazed into the distance, down the long, street, no shade, except beside some vacant warehouses and boarded up factories on the far side of the freeway access road and along the railroad tracks. Beyond the old brick buildings stood rows of drab,  five-story concrete apartment blocks to house people who worked for little or no wages. Another jet plane tore across the sky. Lohbado’s rib cage vibrated as the plane came in for landing. Lohbado decided to hike across the wasteland of graffiti-covered brick, rubble, weeds, trash and broken glass, in a diagonal line, to a more populated neighbourhood, where bus service would likely be more frequent. He passed a group of men lounging on the loading dock of an abandoned warehouse.  Squatters had turned factories and machine shops into shelters. People evicted from their houses, or tenants unable to keep up with huge rent increases found a home in the ruins of the industrial park.

A crow flew over head. More crows appeared. Soon about fifty birds shrieking and hopping about in an eerie manner circled around a mound in the middle of a heap of bricks and rubble. It put a knot in Lohbado’s stomach. He hurried closer. He saw what he never expected to see, black shiny birds tearing apart a corpse. At first it resembled a human body; but on closer inspection, he saw it was the remains of a bear, which didn’t make any sense. What would a bear be doing in the middle of the city? Why would the bear be dead in a parking lot? What was the cause of death? A hunter would likely take the carcass home, or to a butcher shop. It appeared to have been dead for at least twenty-four hours. The fur was gone and the blood dried up. The birds tore meat off the legs. Pieces of vertebrae, rib and black fur were scattered about. The head was nowhere to be found. It sent a shiver up his spine. He was barely prepared to meet bare bones of the bear. He yearned for bare facts. Something strange about the placement of the hips and the scattering of the backbone and ribs, not to mention the missing head, made him think of bear baiting. A bear garden requires a bear. That’s the question. Where would they find such a bear? Maybe the bear wandered into the city during an electromagnetic pulse attack or nuclear storm, during the two-day collapse of critical infrastructures, such as power grids, communications systems, banking and finance, affecting the lives of millions. Lohbado closed his eyes and saw skeletons of various religious followers dancing in his mind, shaking skull-bone rattles and blowing thighbone trumpets.

He felt, for the first time, what it meant to be truly alone. Intense desolation, such as he had never experienced since first venturing out on to the Plains of Radiation after being expelled from the protection of the glass domed community of the Ooo in the Cha Region of the Poh Valley, shook Lohbado to the core. Those crows, cleaning a corpse laid out on a field of rubble, taught him vivid, desolate and shocking aloneness. The fact that he suddenly realized aloneness didn’t make much difference. Nothing changed. His flaccid face showed no emotion, not even a smile, not even a twinkle in the eye, no trace of excitement or elation. In fact, it was quite an ordinary revelation, extremely pedestrian, to the point of being dull. And yet, in a way, it was quite spectacular. Lohbado feared if he didn’t make it to the grey buildings on the horizon, he would be mauled, scratched, torn apart or eaten by dogs, cats, bears, wolves, crows, worms, bugs or destroyed by whatever creature or electromagnetic force turned the zone upside down. He suddenly wanted to get out of there, really fast. He moved his heavy, burning feet as quickly as possible, his heart thumping loud inside the rib cage, as his body melted into sweat.

He was lucky to be alive. Some of the people who were expelled from protective communities ended up roasting on the Plains of Radiation. Many never made it back to the ruins of civilization. Some perished in the nuclear wilderness, overcome in the hot dry wind and sun. A few were attacked by wild dogs, crazed feral cats or psycho killers. Death would eventually grab him by the heart or squeeze the throat; choke the breath out of him. Death happens to everybody, one way or another, when you least expect. When the moment of death arrives, fame and fortune won’t make a difference. No amount of social networking, publicity or friends will be of any use. Lohbado felt weak as such thoughts raced through his mind. He resisted the downward pull, the heavy feeling of the body, the temptation to collapse and sleep on the cement, to surrender to darkness. He had to keep going. He finished the last few mouthfuls of warm water in the small water bottle. The instinct to survive goaded him on.

The top of his head pulsated in the heat, with each beat of the heart. The inside of his wrists and elbows were itchy. His ears were ringing. He felt weak, dizzy, nauseated, with sore joints and a pain in the neck. A gust of energy went up his spine and he went out of his body for a few seconds. He gazed down at the shell of his body, lingering on the threshold of life and death, floating in and out of his body. The horizon darkened. At the end of the dark tunnel, a beige Lincoln Town Car pulled up beside him, in a haze of swirling blue smoke. A tall thin man in a pale orange shirt and cream trousers helped him into the car. Lohbado wasn’t sure if he was awake or dreaming.