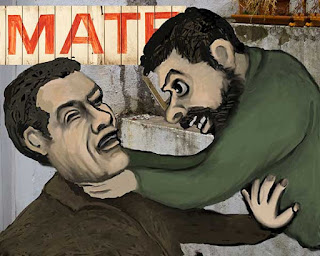 “I can’t repeat this often enough,” said Dr. Jane Wormsly, as she sat at a table with Lohbado in Lumpies Donuts, “Don’t get involved with a fool.”


“We all get fooled sometimes,” said Lohbado, “It certainly happened to me.”

“It’s something I’m trying to forget,” said Jane, “That guy who just walked in reminds me of Rex.”

A man with a mullet hairdo and tinted glasses, wire frames and a goatee swaggered up to the counter, as if he owned the place, and ordered a coffee and donut. The waitress patiently endured his lame advice on how she could improve the service and how Lumpies Donuts could do better business. Maybe at the age of twenty-five, when his skin was still smooth and his voice melodic, he could get away with that kind of routine. At the age of forty, it was repulsive, a raspy, lizard voice, lenses darkened because it’s hard for a con artist to look you in the eye.

I’ll warn you up front, this story is not for the faint hearted. Jane’s ex-husband was an asshole. Nobody would dispute the fact. At least she was safe, after they locked him up in the hospital for the criminally insane. He would spend the rest of his life in there. The hardest part for Jane was when her son Bobby made facial expressions, or little movements that reminded her of his dad. Bobby was nineteen and in his first year of university.
Ok, I hate suspense. I’ll tell you up front. About eight years ago, Dr. Jane Wormsly’s ex-husband Rex, about three years after the divorce, killed and ate part of Hal. Rex warned Hal to turn off the TV after 11 PM. Hal turned it down and sat, his nose practically touching the screen. The earphones were broken. The TV was still audible, like the sound of water dripping endlessly, or a lawn mower or leaf blower.

Rex flew into a rage. He had a very long fuse. It took a lot to make Rex angry. But once it happened, he lost control. A rush of heat shot up his spine. He trembled. His body jerked him to his feet. This time Hal knew it was serious, but he was determined to assert his right to watch TV all night.

Rex grabbed Hal by the throat, lifted him off the ground and slammed him head first into the wall so hard it cracked the plaster. Hal vomited from the force of the head injury and then lay motionless on the floor

"I should never have read the police report," said Jane, "But
when a detective showed up at my place to question me, I
wanted to know everything."

For a while after the divorce, things went fine enough. Rex picked up Bobby, ten at the time, every other weekend and took him to Lumpies Donuts and then to a playground or shopping mall, depending on the weather. Rex showed his son how to shoplift without getting caught. Rex was on welfare. Ninety per cent of his check went to rent. He lived in a cool, damp concrete basement. He lived off rice, noodles and stale pastry from the food bank. He never ate the canned food. His body couldn’t digest the high salt and sugar content. A lot of the food they gave away hurt his stomach or left him bloated. There was no shortage of expired angel cake or chocolate lumps and pastry poofs.

Rex taught Bobby how to load up on crackers, cheese and spiced sausage at the supermarket. Rex was such a spectacle with his long grey beard, it distracted attention while his son stole food. Rex wore clean clothes and looked proper enough, so they didn’t throw him out of the store. If you look too much like a hobo, the security guards swarm all over you. One has to look respectable, and yet there’s some leeway.

Rex showered three times a week. A thin thread of cold water came out from the shower faucet. When he asked the landlord to fix the water heater, the landlord gave Rex a heartbreaking story about the rising cost of utilities and how hard it is to be a landlord. Rex felt sorry for the guy and felt like giving him a dollar to console him in his misery. Rex lived alone in a basement apartment.

Jane gave Bobby a little money each visit so Rex could buy supper. Rex used the money to buy beer. He would get Bobby to steal smoked ham or pork sausage and pickles. That was Bobby’s favourite. He promised never to tell his mother about their system. Bobby didn’t want to see his mother in a bad mood. He knew what would happen. One time he told her that Rex bought beer.  Big mistake. Jane shouted how she felt used and abused, how she had to work so hard to support her son, how she got shafted by her lazy bum of an ex-husband. He never gave her a penny in child support. Dr. Jane Wormsly was head of Helminthology at Lumpkins University and had published three books on worms, one of which became a widely used text book. That’s why Jane said, never marry a fool.

Hal visited Rex on two occasions. Rex said a person on the dole is not allowed to have a room mate. If someone stays with you longer than two weeks, it’s considered sharing. They’ll cut your welfare. A nosey neighbour phoned Rex’s social worker and accused Rex of having a room mate. Rex got called in and had to do some explaining. Hal left. He drifted out of Rex’s life and didn’t return until June. That’s when things went sour.

Hal came to stay. He brought along a portable TV. For three nights, Rex warned him there would be no TV after 11 PM, when Rex went to bed. Hal would wait for Rex to fall asleep, then would turn it on. After spending over half his life in jail, Hal found silence disturbing. He had to have a certain level of noise. The silence of the basement apartment amplified the least noise. Rex woke up each time Hal turned on the TV and shouted at him to turn it off.

On the third night, Rex snapped. He didn’t mean to kill Hal. He was surprised at how easily Hal died. Rex had been wanting to die for years. He concluded that the human body is tougher than you think. It can withstand a lot of sickness and abuse. Rex only meant to demonstrate to Hal that he wasn’t joking about the no TV after 11 rule.

Rex froze in horror once it was over and Hal lay dead on the floor. One thud against the wall. A smear and a bit of cracked plaster. There wasn’t even much blood. Rex’s heart pounded furiously as he dragged the corpse into the bathroom and  plopped it in the tub. No need to go into details. Rex  butchered a few steaks and put them in the freezer compartment of the fridge. He stuffed the remains into three suitcases and put them out for trash.

The caretaker found out. The rest is history. Rex went to the hospital for the criminally insane. He didn’t get caught right away. He actually ate three human steaks. Because garbage day fell on a holiday, those suitcases sat there for a week. Just before the garbage truck arrived, the caretaker got curious and opened one of the suitcases and found the head of Hal, unrecognizable under the pulsating swarm of maggots.

Jane was horrified to think she’d let such a monster into her life. She couldn’t bear to think of it. She tried to get the thoughts out of her head, to erase all memory of that episode. As long as she had a son, that would not be possible. Bobby bore a striking resemblance to his father Rex. It wasn’t easy for Jane.

Fortunately, the man in the goatee and mullet at the counter of Lumpies Donuts took his order and left. Jane squeezed Lohbado’s hand, which lay on the table top, as she told him about Rex. Then she warned Lohbado to please never mention it. Sometimes it helped to tell somebody, but she didn’t want to talk about it anymore.