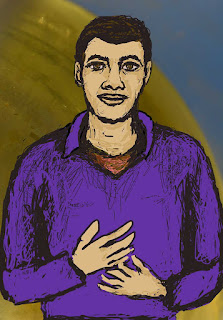 Years ago during a three day storm in the north west region of the plains Lohbado's pickup truck broke down. He did what you're never supposed to do. He left the vehicle in near whiteout conditions and hiked down a road. Panic made him do it. He couldn't bear the thought of shivering in the truck and waiting to be rescued. He was incredibly lucky to stumble into a farm house, just as he was on the verge of collapse. It surprised him how quickly the cold could sap his vital force. The walk lasted maybe half an hour, but in that half an hour, he reached the verge of death.


A door opened. A man about 70 invited him in. To make a long story short, the old man used to own a 30 acre farm, but got bought out after farming practices changed and he couldn't keep up with the pressure. The corporation farm let him stay in the house which he once owned free of charge. The place was falling apart. The toilets didn't work. For heat he burned wood in an oil drum turned into a stove.

Lohbado spent three days with the old man, no radio, no tv. This was the days before computers and android devices. For entertainment the man had three guitars and an old hammond organ. They recorded the three day jam. The time went by in the snap of a finger. The music soothed his nervous system. The vibration of sound opened his mind and he felt at peace in the shack on the plains during a storm with the old man.
Posted by Lohbado at 8:34 AM