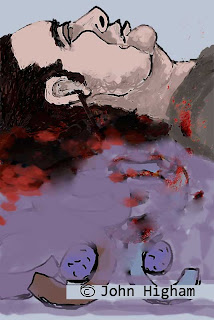 The above image is a digital painting, from imagination. Last night, while I was painting in my basement apartment, a shooting happened. The whole street was blocked off. It was one of the few occasions when I wasn't aware of what was going on outside. This morning there was a huge pool of blood where two bullets went into the man, then a trail of blood marking his attempt to get away.


I talked to three people who live on this street and they were shocked.  One man got out with his web cam this morning to record the pool of congealed blood.  According to the news, the man was shot in the leg and survived. It's the third time I saw human blood spilled on the ground in Montreal, from murder or attempted murder.

There's far too much violence in the world. A little peace and love would help.
Posted by Lohbado at 3:02 PM