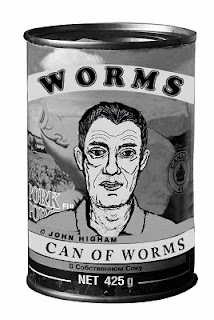 Lohbado opened up a real can of worms the moment he felt there was more to reality than meets the eye. Suddenly, it was no longer possible to knock himself into a moronic stupor of pretending to have a good time, twittering until blue in the face, stumbling over text messages, constantly dialing the wrong number and ending up with computer operators and answering machines. The way of the world left a bitter taste in the mouth.


After so much heartache, sorrow and pain, after failed relationships, trouble holding down a job and difficulty making ends meet, Lohbado went back to the can of worms, took off the lid and began eating, until gradually, the worms began eating him instead. He got all eaten up inside over a simple can of worms. He should have left it alone, foolish man. Well, he came to the right place. Club Morono has all sorts of culinary delights to tickle the palate and satiate the belly.

The Chief Priest at the Morono Tabernacle informed Lohbado that nobody gets special treatment. There's no way out. Once you're in, it's too late. You're part of the situation. Spilled milk can't easily be put back in the glass. There's no choice but to be strong, cheer up and keep going. This is no place for the faint-hearted. Get up and begin practicing the Morono Moves. Wave your arms around. Kick up the feet. Holler a few times. Play the piano. Strum a guitar. Pick up a pencil and paper and allow marks to appear on the page, a cryptogram, cosmic telegram, tuning one in to the larger picture.

Inside the small place, they offer salt water to quench the thirst and serve saw dust for the stomach. When you're lonely, they tell you to embrace a porcupine. When you're depressed, they tell you to team up with a laughing hyena. At Club Morono, you'll find wit, good humor and sensual delight. Of course, there's no such place as Club Morono. It's all part of Lohbado's imagination. Even so, it's better to imagine something wacky and weird than to endlessly wallow in depressing scenarios and wretched thought.

Lohbado wishes that everyone might enjoy a slithering, moist and sticky can of writhing, dancing and singing worms. May you eat the worms and may the worms eat you.
Posted by Lohbado at 6:52 PM