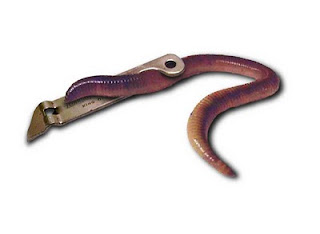 Richard Wilson, a photographer who lives in London, England, took the above photo and sent it in response to the can of worms situation mentioned in the last post. A can opener makes opening the can much easier. This can opener is special because it contains the words: “king of” and then the worm, in other words, king of the worms.
In Morono Philosophy, one takes seriously these types of coincidences, or messages from the cosmic unconscious. I was so delighted to receive this photo, I had to eat two boiled eggs and drink a pot of coffee to calm down. It's one thing to receive a picture of a can opener destined to be used to open a can of worms, but that the words "king of" should be engraved into the handle of the can opener, any alchemist or follower of the Secret Alphabet would understand.
Ok, I don't mean to open a can of new age, occult, hocus pocus, mystical gibberish. Instead, focus on the random synchronicity, two apparently random events coming together in a meaningful manner. It started out as a can of worms, meaning,  to start doing something which appears simple enough, but then it ends up getting complicated, often in an aggravating manner. It's like trying to replace bathroom tile, with new, self-adhesive tile. But then the tile doesn't stick to the old tile. So one has to remove the old tile. As one removes the old tile, the plaster is damp and crumbling underneath. Suddenly the whole bathroom wall has to be rebuilt and a plumber called in to deal with pipes in the way. The act of trying to  put on the new jiffy-simple self-adhesive tiles opened up a whole can of worms.
Before I get to the significance of the Worm King, I'll start by putting the whole situation into perspective. The worm thing is connected to the fact that I live in a basement apartment. Last fall, soon after moving in here, I had a nightmare about being in a grave, with worms crawling all over me. I woke up in complete darkness and for a moment thought: this is it; I’m dead! An absurd thought of course, because to have such thoughts would mean I’m still alive, unless of course spirits really do exist. Maybe there really are spirits lurking about. Maybe at night I turn into a restless spirit sometimes and carouse with other disembodied spirits.
Sleeping in the bedroom of this apartment does bear resemblance to lying down in a deep clay hole. The apartment has an earthy smell. During heavy rain, water sometimes leaks in under the bathroom floor, activating a funky odor. Exiting the apartment feels like climbing out of a grave. As I step outside, to the right a set of old concrete stairs leads up to the back yard. To stand in the doorway creates a feeling of being neck deep, in a hole. I get this feeling as well when looking out the living room window. The front lawn is at chin level.


To settle the spirits, I did a little Oogah ritual last autumn and made an offering to the back yard...

Guests have arrived. I must leave... to be continued.
Posted by Lohbado at 6:02 PM