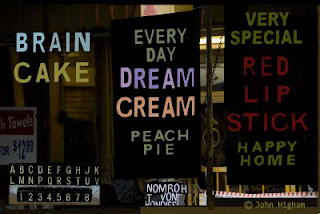 Sometimes the Great Nomroh kicks me out of bed in the middle of the night and tells me to reveal more of his secrets. It's now 3:40 AM, I will speak of the conflict between the Nomroh and the Yees and why the ancestors of Lohbado adopted brown and green as preferred colors.

If you look at the above image, you'll see the word Nomroh. Anyone experienced in Morono Practice will quickly unscramble the word Morono hidden among the letters of Nomroh. Nomroh was a cousin of Oogah, the anthropomorphic representative of God and co-creator of the universe. Nomroh attracted a group of followers in the deserts of Arizona, two thousand years ago. The ancient Nomroh civilization was wiped out during a conflict with the Yee invaders from the east. Traces of the Nomroh civilization have been found around the rim of Grand Canyon. In Utah, Nomroh secrets can be seen in some of the unusual rock formations of Bryce Canyon. I've received emails from people who actually heard the voice of the Great Nomroh, while visiting Monument Valley in New Mexico. The Nomroh people roamed over the south west, two thousand years ago, until the Yee people, ancestors of the Vikings, crossed the vast sea in search of hot dry land in the middle of the big continent.
Lohbado was able to trace his ancestry back to the time of the Nomroh and recently explained to me the significance of his wardrobe. I'm not fashion conscious, but after Lohbado mentioned it, I noticed how he mostly wears brown, beige, green and white. Lohbado explained the reason for this color choice: two thousand years ago, when Nomroh followers were being attacked by the Eastern Yee people, Oogah told the Nomroh followers to put on green or beige shirts and brown trousers and to sit still on the edge of a hill. This was an early example of camouflage. Soldier and hunter outfits use these colors a lot.
It worked.  The Eastern Yee climbed to the top of an escarpment, gazed over the vast plains and were unable to spot the Nomroh. The Yee wandered elsewhere and left the Nomroh alone. This story also has symbolic meaning. The first two letters of Nomroh form the word "no", while the plural of Yee is "Yees". In other words, what happened was one of the earliest known conflicts between Yes and No, a conflict which continues to the present day. Nobody is sure what it was about, other than one side said yes and the other side said no.
In Club Morono, the color scheme is more on the outrageous end of the spectrum, pink, orange, yellow, purple, red, baby blue and so on. In Club Morono, every color is welcome and celebrated.
On a historical level, oral records indicate that hostility broke out between the Yees and the Nomrohs over a plate of sausage. The Nomroh insisted intestines were part of Offal and should therefore be burned as an offering to Oogah. The Yee argued sausage was a sacred food. Without intestines, digestion would not be possible. I won't go into detail about the various arguments offered supporting each belief system. Conflict broke out. Oogah was not pleased. He extended his arm to stop the battle and told the Nomroh and the Yee that sausages were a sacred food. To ensure healthy digestion, people should eat sausages at least once a week. The Nomroh traced this battle back to a Tuesday and so eat sausages every Tuesday.
I would like to end this post with a little prayer:
Oogah, please make us familiar with sin, so that in knowing and practicing sin, we may repent and ask forgiveness. As the present slides into the past during our miraculous journey into the future, as these words become forgotten soon after spoken, as this prayer quickly proves futile and the belief in a deity not better than belief in Santa Claus, please Oogah, deliver us from confusion. Open our eyes to the presence of benevolent space aliens bringing us good cheer form other planets, where sin is virtually unknown. Planet Earth is the only planet, according to Captain Dream from Planet Blop, where sin is openly practiced and even celebrated. It took the Balopians many years to understand the very concept of sin; they were so firmly grounded in goodness. Oogah, we ask you to make us as good and as free from sin as the Balopians.
Posted by Lohbado at 4:09 AM