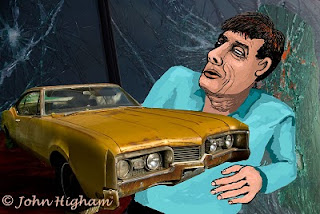 Before I describe the accident, it might help to provide a little information about what was going on at the time. Ernie died when people were driving to lunch. I witnessed the car crash, but didn't stop. A lot of people saw Ernie plow the 1967 Oldsmobile into a maple tree on the boulevard. Actually, the police seem to prefer when people don't stop. They shout at you to keep going.