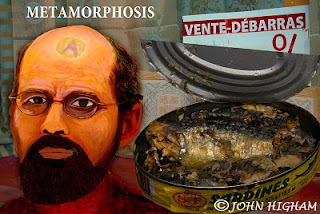 This main follower of Morono ate too much spaghetti. Starchy flatulence blew him out of bed at 3 AM. He began to worry about the politics of pasta, how in some kitchens, the pot often boils over, while in other kitchens, due to dysfunctional heating systems, noodles barely reach body temperature and don't fully expand into soft, moist eatability. The man in the picture, a circular head injury, or trepanning, cosmic hole in the head to facilitate ooze. Beige matter ooze from the brain room, the place of the skull, origin of religion and monetary systems.

Within the golden pasta bruise on his forehead could be seen the letter A. Why the letter A? That's a twenty-six letter question, going back generations. It evolved from an origin of species attempt to win lovers and scare away enemies. Why did they talk? What caused an eruption into letters, words, and images? The attempt to tell all led to misunderstanding, insults and unspeakable consequences. Shocking secrets revealed, what did they do in the dim light after midnight? By the population of planet earth you can tell whatever they're doing has been done a lot by a lot of people. It's not just an activity reserved for sexy bodies and charming personalities. Cats do it. So do dogs, cows, pigs and donkeys. I've even seen house flies making out on the windowsill.

However, pasta man aged into a funky, tomato sauce consistency, a metamorphosis or inter-penetration of man and material. Eater and that which is eaten makes up the globular process of embodihood in an eatable world, a garden of things to eat. That's the way Zog planned it. According to inhabitants of planet Zog, that's the way Zog wants it.

A powerful interplanetary force of being and nothing, belief and disbelief, saved and damned, good and evil, for us and against us, cat against mouse, dog against cat, wolf against dog and so on.
Posted by Lohbado at 4:56 PM